Off to the seaside 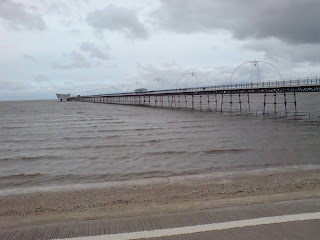 I had an early appointment this morning so once that was finished I headed out to ride to Southport. Since I'm not training for anything at the moment, its all base mileage at this point I decided I wouldn't let myself look at the speed I was averaging. That was harder than I thought it would be, I like my geeky stats! When I got to Southport the sea was in, usually you can hardly see the sea, in fact since they let you park on the 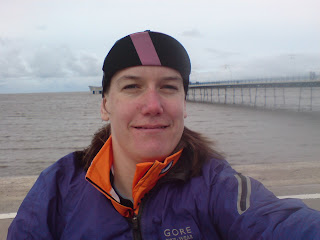 beach I had always assumed that the sea never came in that far! I went and got some chips and then sat on the sea wall. I got a picture of the sea. I then tried to get a picture of me with the sea in the background, but it never seems to look right when I do that!

After that I headed home, I think I might try this route in reverse next time as the headwind along the coast road was hard work! On the way home there were about three showers, one was quite heavy but I decided not to put my jacket on, The gillet did keep most of it off though and I didn't get cold.