It hardly seems five minutes since I was up here and racing the inaugural kielder100 and we were back again for the 2010 version. No Ali racing this year as she had managed to hurt her back in the run-up (good for me as it meant she could look after a stressing trio!) On the friday we got ready to go and then I changed my mind, I wasn't as fit as last year, I couldn't do it, we wouldn't go. Ali ignored me and we were soon in the car on the way up the M6. Arriving at the campsite we found our pod, thanks to Rich being organised and booking in advance before deciding on a different adventure we were camping in luxury. 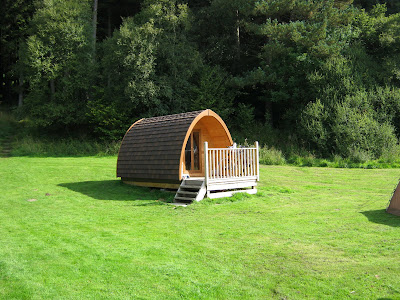 After registration Ali cooked me dinner, she is good, we then got eaten alive at briefing and I decided that looking stupid in a midge net was worth it. Off to bed and thanks to Jon for lending me the comfiest sleeping mat in the world I really was in camping luxury. I still didn't sleep well and I should learn that if I wake up cold I should put more clothes on and not just try to go back to sleep as I just wake up again! Morning dawned and Ali was up and cooking me porridge (while I was lying in bed denying all knowledge of any race!)

Up to the castle for the start, wow there were a lot of people! 534 started out of the 627 on the start list. I "dibbed" in and joined the queue. I found Jane and tried not to feel too nervous or remember how bad I felt last year. Once again we just all started riding and it wasn't long before the pace car pulled off and we were allowed to race. I was on Heathers wheel at this point but we hit the hill and she disappeared, if fell running makes you that fast uphill maybe I should try it? With so many more people on the course some of the singletrack was a solid line of people meaning that I was riding harder than I liked at times but also slower than I maybe would have with the trail to myself on some of the downhills. 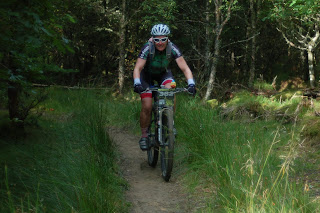 But after the first bag drop it got quieter. Just after I finished all the vimto in my camelbak and was swooping down some singletrack I came round a corner to see Ali and Andy taking pictures. It's always nice to be cheered and I was feeling good at this point. I did see if Ali had my spare camelbak but she was expecting me to want it at Newcastleton. So I headed onto the next water stop and filled up there. 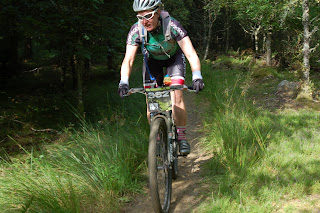 At this waterstop we had to head down the hill and up a grassy bank before completing a 7mile loop back to the water station. At some point on the loop climbing a fire road my rear tyre exploded off my rim in a cloud of latex. Time to work out how to remove the rim strip (the valve was attached) and put a new tube in. For me I managed this with minimal panicking, although I did think at one point I wouldn't get the tyre on as everytime one bead was seated the other didn't want to. Jane came past and stopped to check I was fine but I told her to keep going as all I had to do then was fill the tube with CO2 and it meant I had a target to try and catch ;-)

Then it was the lovely switchback push up the boardwalk at the top where Joolze seemed to be doing a spot of landscape photography! Then the course headed over towards Newcastleton. I felt I knew this trail well having ridden it twice since last years even and tried to pretend I was with Ali on the fireroad descents (she was noticeably faster than me last time we were here so I had to not brake!) It seemed like no time at all and I was getting to the feed stop at Newcastleton. 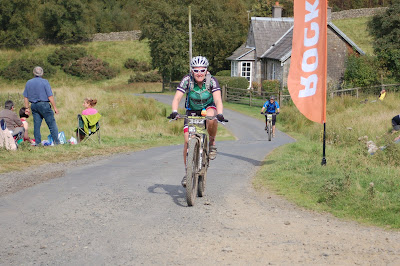 In I went and grabbed a chocolate-cake-biscuit thing and a banana before waddling out, Ali insisted I did more waddling for the camera! I made my stop short and got back out quickly, heading up to cover more of the Newcastleton trails. 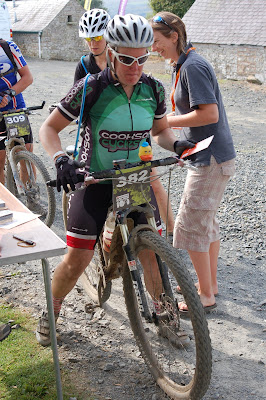 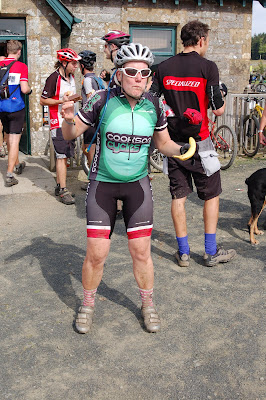 I had nice chat with Jane at Newcastleton as we both stuffed our faces! She was much better with the timing dibber than me, I needed someone to help me! 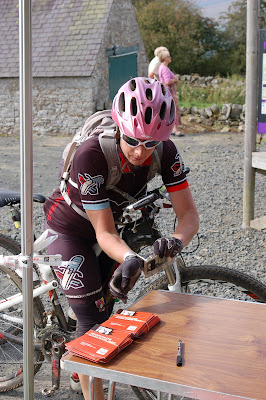 The next section to the final feed was good. Last year it had been hell but this year I felt good, I mean everything hurt but I still felt reasonably strong. The last feed I grabbed some more water and my teacake and waffle and proceeded to walk up the hill before riding a section with two lads where we were almost taking turns at the front and pulling each other along. Back into the singletrack and I had to walk up a couple of sections but I recognised the last uphill and so there were lots of smiles as I turned onto the last descent. Flying past Ali offering me the keys to our pod I told her I couldn't stop there! 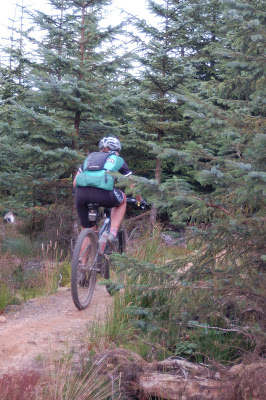 No picture of me finishing as although Ali ran the last mile down to the finish (not along the trail though) I was a lot faster on the bike! Odd that ;-) Back up to the castle for my free beer and food and to wander round in a daze for a while!

A fantastic event and I'm already thinking about next year maybe gears??? Ali is looking forward to getting to ride it as well.