A weekend in the lakes with the dogs 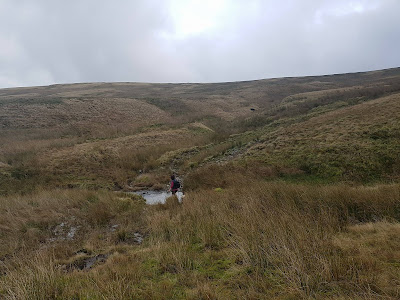 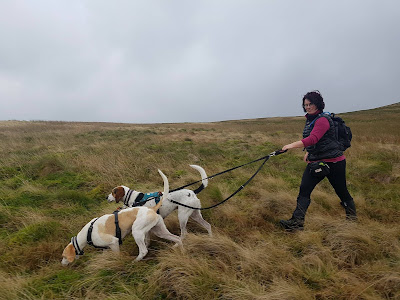 A friend mentioned that High Terrain Events are dog friendly and I spotted one at Ennerdale in the Lake District back in the summer and decided to enter as it was a part of the lakes I hadn't been to and there was camping at the start if required. There was a choice of a 10k, a 25k or a 50k race I decided to go for the 25k as the 50k was just two laps and the 10 just part of the 25k route. This meant I would be racing on the Sunday but it is a long way so I headed up on the Friday for the weekend.

On the way up, after spending way to long sat in traffic, I met up with a Canicross friend Helen and her two trailhounds and we went for a lovely 4.5 mile walk in the Howgills, somewhere I love as its so quiet and so beautiful. 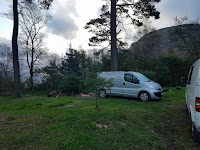 After a hot chocolate and cake at Tebay I headed off to Ennerdale, arriving at the Scout camp just before dark. I was given a choice of where to park up and went for the most out of the way spot even though that meant there wouldn't be a quick getaway. Meant the dogs didn't have anyone wandering past them at any point. Van set up I made myself tea and with the weather getting worse, wind and rain, curled up with a book before falling asleep early. I woke up loads in the night, probably the wind and was up and about early. 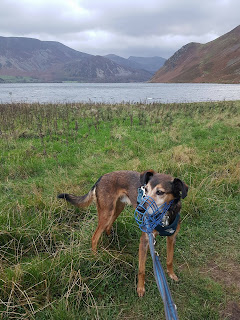 On Saturday it was the turn of the 50k Ultra runners so after a walk along the last part of the course with Chip and George, which meant my first view of the lake and an idea what the terrain was like I headed out with Cybi for a run along the 10k route. I wanted to make sure I was well out of the way before the fast ultra runners caught me. The route started along the southern lake shore and the wind was so strong it was blowing the water into the lake wall where it was splashing up and covering us, well at least I knew I wasn't going to stay dry, turning onto the West side things improved and it was mainly fireroad, with one muddy section, up to the top of the lake where we turned down the other side. This was vary different terrain, it felt like running along a wet slippy river bed on rocks that were baby head sized, even with Cybi looking after me I was mainly walking. Once we got on the bit that is mentioned in the race notes, below Anglers Tarn it was fine and the bit of scrambling easy enough. We got back to camp too late to see the ultra start though. 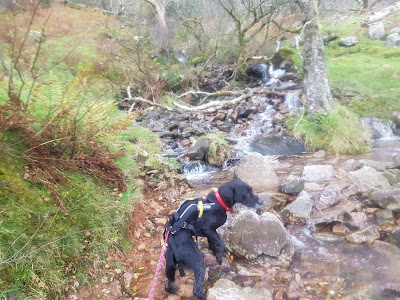 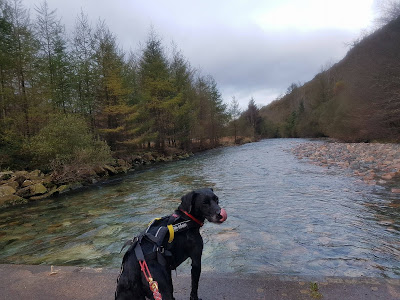 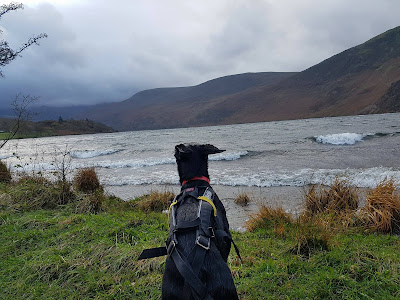 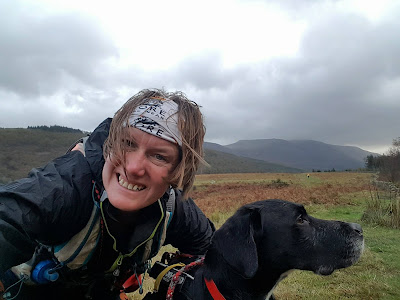 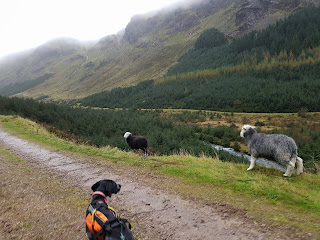 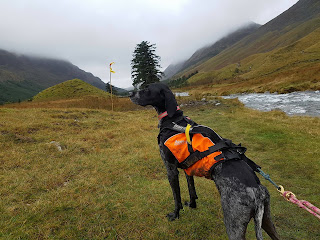 After an afternoon of chilling in the van with some cheering on the ultra finishers we curled up in bed early listening the rain and wind get worse. Waking up I decided it was a little better and got myself and Chip ready. I spent some time trying to decide which trainers to wear and went with my Altra Lone Peaks, this turned out to be the right decision as most of the trail was hard pack and I did manage the muddy sections in them! It is our first time running a human race without a canicross start so we started at the back and she was a star trotting to heel until the tracks widened out and we could do some overtaking. She got lots of compliments as she trotted out nicely in front of me most of the time, she let me lead the way through the boggy section up near Black Sail Youth Hostel though! They had changed the route as it had been decided the East side of the lake was just too dangerous in the weather conditions so once we returned to the lake we crossed over and retraced our steps down the west side. Chip started to feel cold here, well her bum did, so we had a few stops to warm her up and she got a bit scared by a lab who wouldn't leave her alone. But it wasn't long to the finish and we crossed the line in 2hrs 48mins 28secs which I was chuffed with. I did miss the finish line cake though as I quickly took Chip to the van to get warm! This meant we were 72nd overall (out of 113), 12th in our categorey ( F / 20) and 22nd out of all the females in the race (/42). 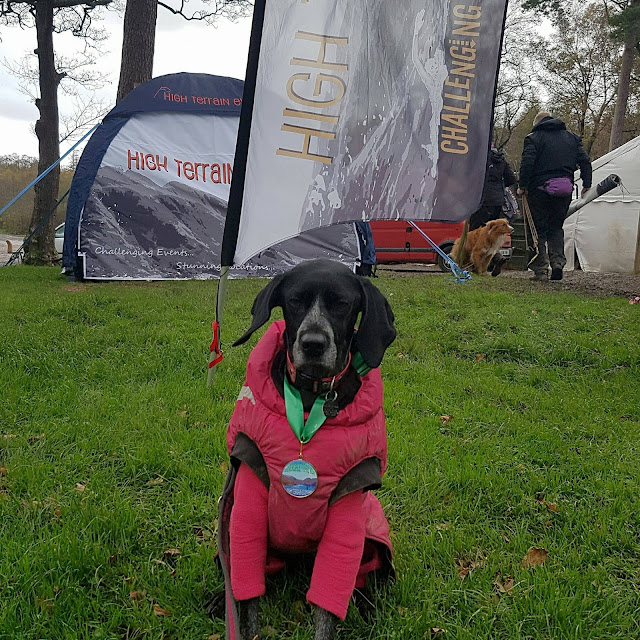 After some lunch it was time for some last walks before packing up and heading home. I'm now looking at what other races they do up there. 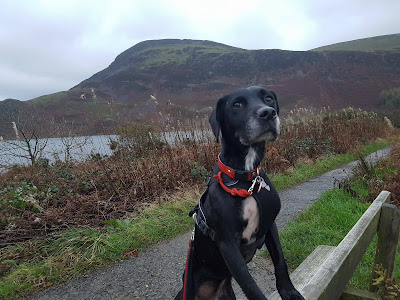 Posted by trio at 17:47 No comments: Links to this post