A weekend in Wales

I'd seen an 8.5miles trail race for canicrossers at coed brenin mentioned on the Canicross Angelsey Facebook page and realised it was a weekend Ali was down in Cambridge. A little persuasion and I had entered and booked camping in Wales so cybi and I could go on a social run on the Sunday as well. 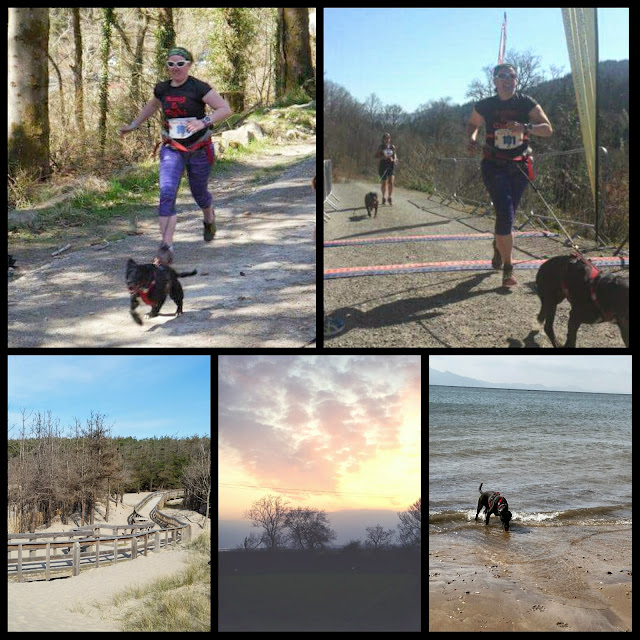 Friday, feeling more than a little nervous,  I packed the car and headed to Wales. Arriving at the campsite I discovered we were the only ones on the tent field so could choose a pitch, which meant I could put the tent up away from the road and any headlights passing to disturb cybi. I also discovered they did breakfast rolls which they delivered to the tent. The place was very dog friendly and has an enclosed field for exercise, I even let cybi have some off lead time.
Saturday and the day of the race turned out to be warmer than was ideal for cybi and he was overexcited from us getting up, think he knew we were running as we've only camped before running recently. This meant he was barking lots in the car on the way, we were also early but that made parking easy. Registration was easy and the race number had our names printed on, a nice touch. We had our own briefing quarter of an hour after the main race had set off and then it was time for our first mass start. Cybi had been shadow chasing all day with the sun and he's been very excited recently at the start of races so I was a little concerned but as soon as we were off he was completely focused and trying to get past everyone, impossible with me attached! Soon the race settled down and we were swapping places in a group of four, mainly running with Buster and his human. Apparently Cybi was a good influence and really encouraged Buster to pull. The race was hilly and the trails technical but there were only two downhills I walked. Any bit of water and Cybi would stop, it really was a bit too hot for him. At the halfway drinks station I checked his paws as there were a lot of gravel tracks but they seemed okay, I was carrying boots just in case. My feet were a bit sore, maybe I should have put paw wax on as well.  The finish was uphill but cybi still had enough in him for a finish sprint! Being in Wales everyone knew how to say his name so calling him was very effective. Once we finished he was back to shadow chasing, obviously not tired.
Another night camping, another night walking up on the floor of the tent with Cybi stretched out on the sleeping mat! I packed up and drove us over to Newborough Beach for the Canicross Angelsey social run. We were there early enough for a walk along the beach, nice as we are about as far from the sea as you can get where we live. The run was lovely, round the forest and along the beach. Cybi wanted to be at the front the whole time! On the beach we let the dogs cool off in the sea, cybi being a silly boy decided to drink the sea. Near the end of the run her stopped pulling and was sick. Sea water didn't agree with him at all. He was sick a few times so I got him back to the  car and got him some fresh water. While I was worrying about him he was soon back to normal!
Then it was time for the long drive home. Fortunately a tired Cybi slept the whole way. We had a fab weekend, just wish Ali could have joined us.
Posted by trio at 21:28 2 comments:

Yesterday Ali was off to the football so Cybi and I had a couple of mini adventures. The first one was when we walked to Spar picked up lunch then walked the long way back, stopping by the river to eat lunch.

Then in the evening we walked over to Hassop Station, it was a lovely evening for a walk and we even saw hairy coos. I had pizza and then we walked home, the last part of the walk was in the dark. We were home just before Ali and all three of us were ready for bed. 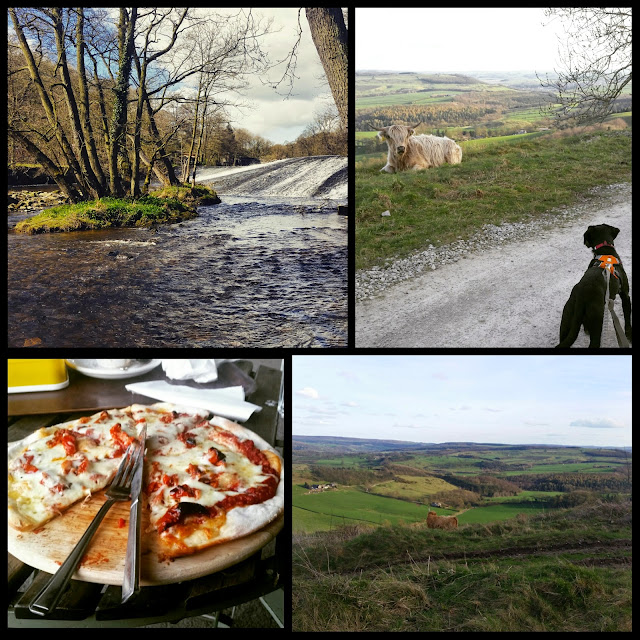 Cybi and I have a race in Wales next week so I need some miles in my legs otherwise it's going to hurt a lot. I also want Saunders to hurt a bit less this year so need to do some hills and get used to wearing a rucksack. Since its now getting busy out here at the weekends I drove us up to Cubar Gap for 730am and we set off along Cubar Edge. It was a lovely morning and we were just jogging along, with lots of stops for photos. We continued along Froggatt Edge and then up to White Edge, here we saw deer. We finished off with Baslow Edge getting back to the car just as people seemed to be arriving, we saw about four people the whole run and had a great time easily doing the distance, maybe next time I'll try and move a bit faster. 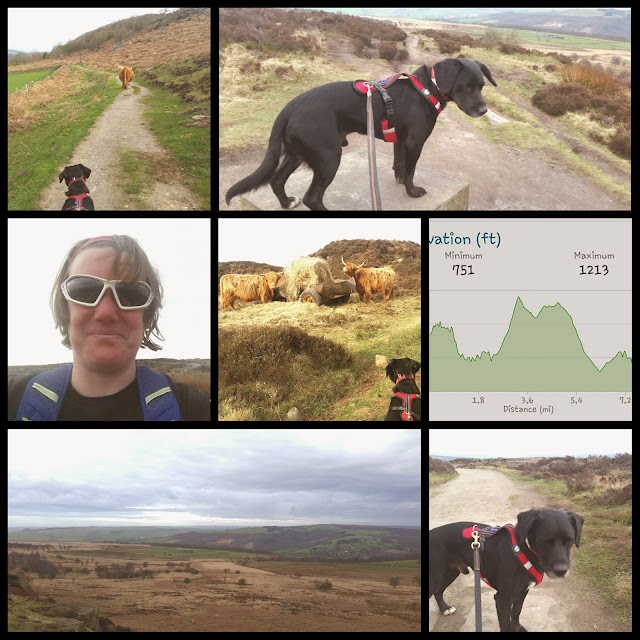 A while ago I suggested to Hannah that we did the Wednesday audax over Easter, we had enjoyed it last year when we rode with Sarah, Al, Ros and Julie. Hannah suggested we did the hilly one for a change this year. Although I hadnt done much riding since last summer I thought why not, anyway it would motivate me to do some riding. But before I knew it it was Easter and I hadn't done much riding.

After some bike fettling in the car park and a second breakfast at Costa we were on our way. The weather was stunning and I was glad I had put sun cream on. The route was brilliant but definetly hilly with some steep steep hills. Hannah has been riding more and so she was powering up the hills while I plodded along. By the end I was sore but happy after a great day in the saddle.

Just over 100k with over 2000m climbing was a brutal reintroduction to riding. 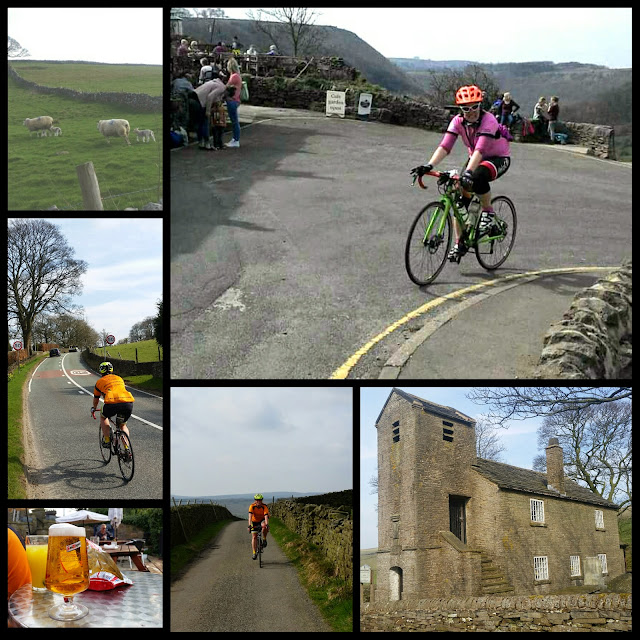