On Sunday there was a social run at Teversal so me and the woofs headed over. I had planned to run the boys on the main run and Chip on the beginners run. But Chip noisy had other ideas and I'm a soft touch so I ran all three. They were very good and didn't kill me even though George decided to pull as well as the other two. Then Chip and I did the beginner run, she was a very good girl back marking with me. Obviously one of the highlights of Teversal is the super cheap cafe where you can have a three course meal for less than a fiver.

Once home I entered a marathon so time to get some long runs in again. 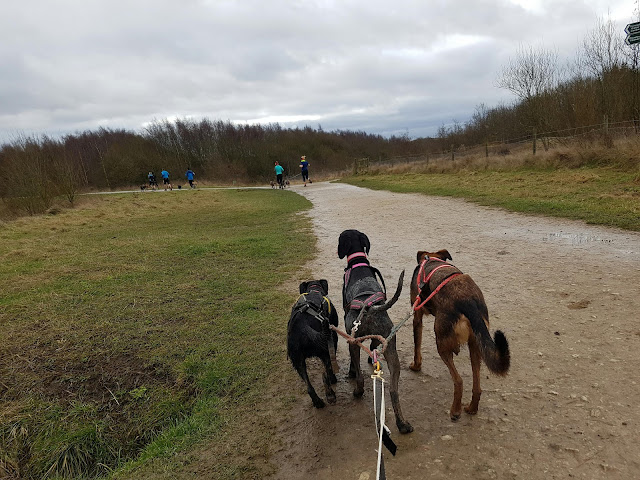 A run with Chip

Last year I did a number of the Dark and White trail runs but some of the spring ones they didn't allow dogs and this year said it would be a week before they would let us know so I didn't enter. The first event in the spring series is tomorrow and has sold out but also no dogs. They put the maps online so I plotted it on my OS map, planned parking at the top of the loop and this morning me and Chip went to run the loop. It was good for me to practice my map reading as well. The loop was lovely heading up onto Stanton Moor to Nine Ladies, somewhere I've never been before which is an overnight. We got back to bumble just as the rain started so that was perfect timing. I enjoyed the loop especially the first half (from where I started) and will definitely do more running round there. 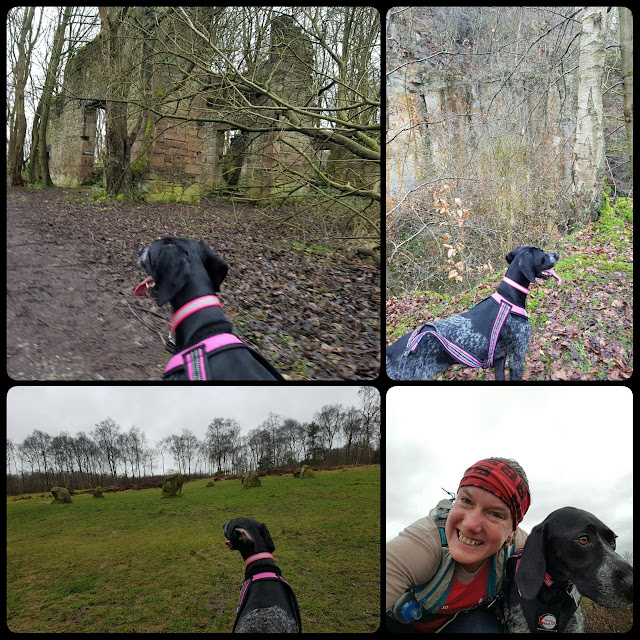 Although it was snowing a bit at home it was also very windy and rainy and pretty yuck. Ali had a 6.5 mile run on her training plan (she's entered a marathon) so I suggested heading up to the edges to see if we could find snow. We all donned waterproofs and packed spare layers (the dogs go got me to carry theirs) and headed out along the river. It was pretty horrid weather but good to be out together. As we started climbing we started to find white stuff. George had a good woogle and we all got excited. Along the edges we were back into the wind and as soon as we started dropping down there was no more snow.

We finished the run at the pub, stripped off our wet layers and had pizza for tea before walking the last bit home. A fab 7 mile adventure from the front door. 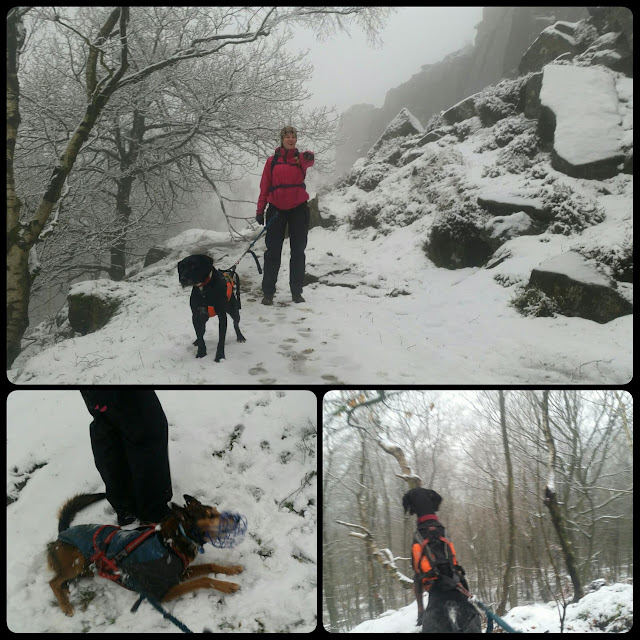 After the last mini mountain marathon of 2016 in November I entered Hannah and I into the first of 2017 as it was also going to be in the Peak District. Unfortunately they then changed the location to the lakes. We decided to still give it a go as Ali was happy to look after the dogs. So on Saturday I headed up to Leeds to collect Hannah once she finished work. We stopped at Tebay for our tea which was lovely and nice to see it quiet for once. Hannah had worked out a layby for us to sleep in near the start so once we got there and parked I quickly made up the bed and we got some sleep.

In the morning we could see snow on the hills and after lots of faffing, from me, we were on our way at 818am. The first control was relatively easy and flat to get to and then we started climbing. The climb was long but steady and we were soon at the next control. Leaving here was impossible without getting wet feet and then we were in snow. My feet were really hurting and I was trying to get them to warm up. Eventually they did and we got to the next control on the snowy top of a hill. On we continued and started Scrambling a bit, this meant we went too high for the control. A bit of map work and we realised we didn't want to follow the others further up and we started Scrambling down as we were sure the control was below us. This was interesting and slightly terrifying as it was a steep snow covered slope and very very slippy. I was using both hands and when it was less rocky by bum. Hannah had a bit of a slip but fortunately stopped pretty quickly. We were very pleased when we did find that control.

After that excitement we headed back to the valley and along, collecting one more control. With a bit of cajoling Hannah even managed some running as we were going to be late back (which means losing points). We were only ten mins late back in the end so not too bad. After changing into dry clothes it was time to head home, via a late lunch at Tebay.

It was a fab day but such a long way. 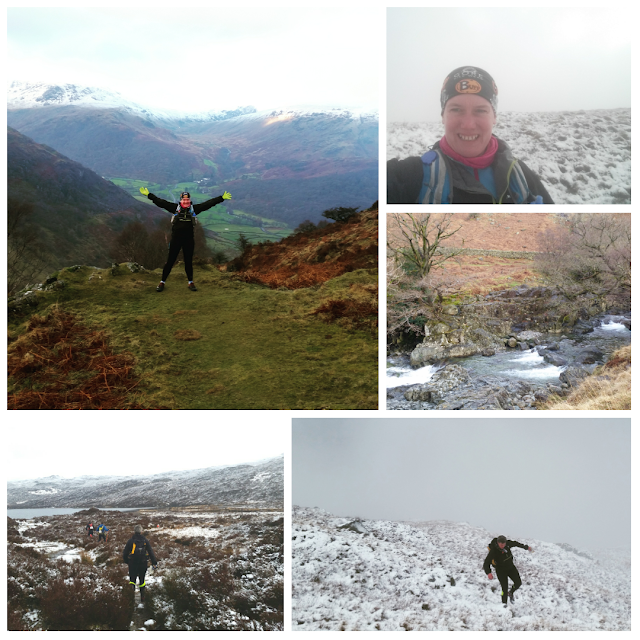