I had cleverly managed to coincide a trip to Cambridge with an audax that started 25miles away. I had rode the 160k route a couple of years ago, riding to and from the start, but this time I was down for the 200k and Ali kindly gave me lifts to/from the start.

It was a lovely day and I set off in shorts, knee warmers, long socks, base layer, Jersey and showerproof. It almost felt like summer. Within four miles I was fixing a puncture, annoyingly I didn't find the cause, I also swapped out of winter gloves at this point. Having had to stop so early I was now at the back of the field. But I caught a couple up before long. Only then I had a rear wheel puncture, I've never punctured on an audax before, then two! This time I found the cause, my rim tape had developed a hole over one of the spoke holes. Some electrical tape to cover that and I was on my way.

The first cafe stop was at a garden centre and I had cake before heading out back to HQ. Unfortunately I was now riding straight into a headwind. Back at HQ I had beans on toast before heading back out into the headwind. In total it was 100k right into a headwind. I didn't see many people while riding. Swapped places once or twice with a few till about 30k to the finish when I met a guy who was struggling to navigate as his garmin was playing up and he didn't have a routesheet holder so was having to get it in and out of his pocket. Soon it was lights on after a lovely sunset. It was nice to have company in the dark and the miles flew back.

Back at HQ a day Ali was already there. Then back to her mum's for pizza. A lovely day, even with the headwind. I'm sore now though. 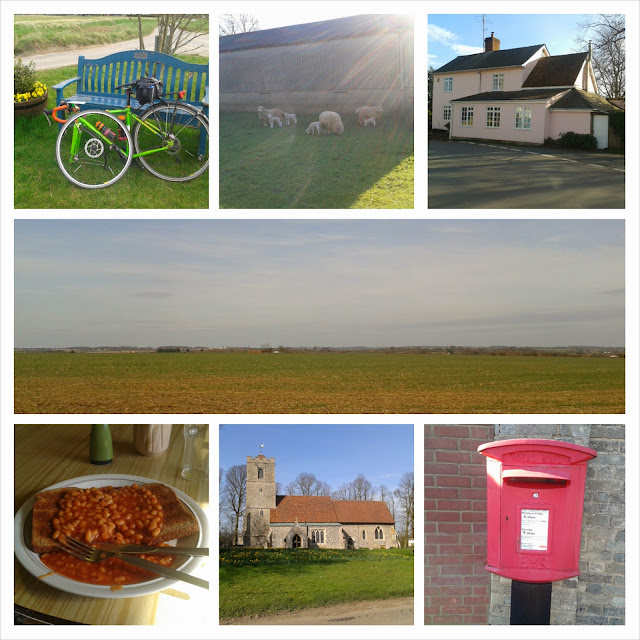