After the disappointment of not getting any Olympic tickets orginally we have managed to get some. On Monday and Tuesday we will be in London for a mini-break including a night in a hotel. But yesterday we had managed to grab some Volleyball tickets so headed in for that. It was exciting to watch and the atmosphere was brilliant. Once that finished we wanted down to the road race route and after grabbing some food grabbed a spot just after the 3km to go sign. Thanks to twitter I was able to keep up with what was happening in the race. It was disappointing that Cav didn't get a chance to sprint for the win but we got to cheer the British Team past. 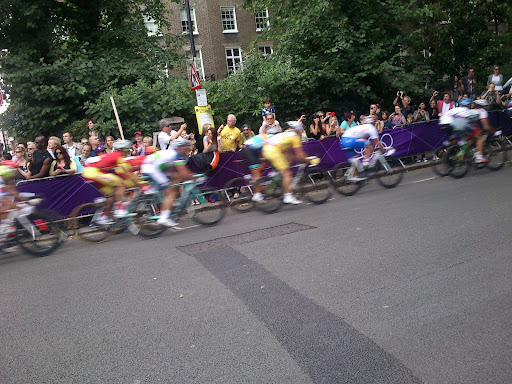 My friend Ros asked if I fancied a ride to Southport today when I saw her on Friday. Never one to turn down the chance of a nice ride I jumped at the chance. I knew I had to be back in time to meet Ali at 5pm so we meet just after 8am and were on the road by half past. Although there was a headwind we made good time arriving at Southport for 10:30am, fortunately they were just putting the chips on so we only had to wait 10mins.

On the way back I had a moment where my front wheel skidded on some gravel and I thought I was going down on the side I had injured but no I held it, don't really want to be testing the collarbone just yet. A stop at Freddies on the way back and the difficult choice of which icecreams to have.

Home just as it was trying to rain just after 2pm so plently of time to have a shower and wander over to Ali's work.

I like going on road rides and this one is great for the food options. 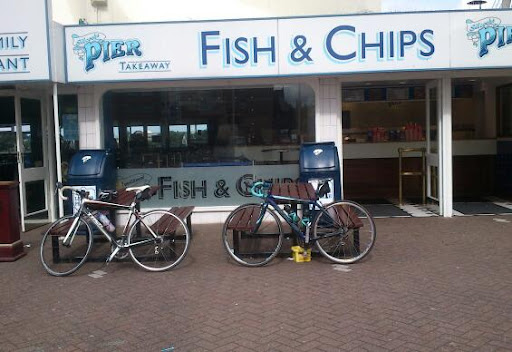 Today I was having lunch with my mum, we met early as she had a meeting in the afternoon. I rode out to Falshaws Farm Shop and since it was early we got to sit at the window and enjoy the view. I had both an ice-cream milkshake and an icecream, a little piggy.
Then we started our Olympic viewing once Ali got home with the women's football that I had recorded earlier. A GB goal had Ali running round with her flag. Tomorrow we are off to Old Trafford to watch the men's side. 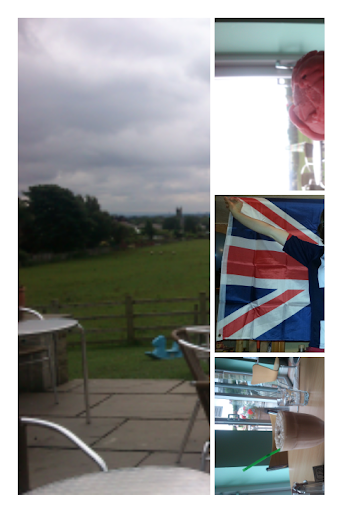 Although Ali has finished the Rapha Rising challenge on strava and so is not out every night getting as much climbing on her bike as possible she still fancied some rides this week. Last week I had ridden her mountain bike over to Rivington so she could ride back after running, while I drove the car back. We decided since it worked so well to repeat it this week. This time I had tired legs but I rode all the descents and the collarbone was fine. I did have to tell myself to relax but as long as I did it was fine. 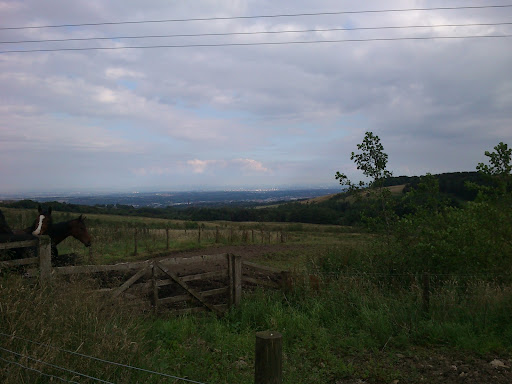 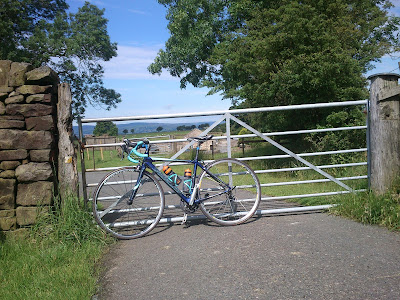 A friend encouraged me to get Ruby ready for riding last night, so the turbo tyre came off and the mudguards. I couldn't decide on a plan but did plot a route north from home into the hills I also had the option of a group ride to Southport but was unsure about riding with a group as I had no idea how the collarbone would be with a longer ride and how unfit I actually was. This meant I went to bed without making a plan. This usually leads to me doing nothing on the day!

As it turns out I slept really badly and didn't really get back to sleep after 5am so at 6am I got up. 7am I was out the house to ride the loop I had plotted. It was really hilly but also really sunny out. It was a shame that I had a headwind on the way home as by that point my legs weren't working quite as well.

I timed it perfectly arriving home just as the tour coverage started meaning I got to enjoy Wiggans winning and Cav getting the stage.

Being back on my bike is great but a short spin on kiwi showed me I'm not ready for a fixed wheel just yet which has the panniers. I've been using my cross bike for the low gearing and wider tyres so I needed to carry stuff on this bike and didn't fancy putting a rack on as when I rode in off-road with panniers it wasn't much fun. So yesterday I visited Keep Pedalling and came out with a lovely Carradice and a support so it didn't just sit on my rear mudguard. First ride today to meet Ali for lunch included some shopping today. It holds loads and isn't noticeable when riding. The problem is I might need a smaller on for days I don't need to carry as much! 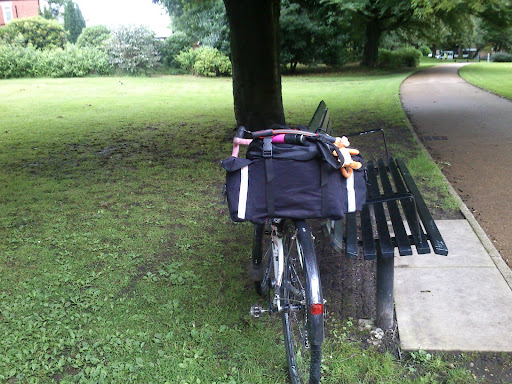 Back on the bike

Ali was getting worried about me when I hadn't jumped on a bike on either Friday or Saturday. Not sure why I hadn't I wasn't really nervous it just felt odd to just go out and ride. So when Ali headed out on an epically hilly ride on Sunday I decided to head over to Lee Quarry and cheer at the Singletrack Weekender. I rode my cross bike for the extra cushioning of the tyres and the lower gears. I was suprised how easy it felt! Riding back I met up with a tired Ali and was able to be a bit of a wind block for her.

Monday was a ride for cake with my friend and her toddlers. Tuesday I rode to the shop and then in the evening rode Ali's mountain bike over to Rivington so she could ride it home after going running (she is currently doing a climbing challenge so packing the miles in).

Today I met Ali at her work and accompanied her on her ride which meant lots of hills. I certainly will have slowed her down a bit but I brought the nice weather and she seemed pleased to have the company. I was loving being back out in the hills. Although being on my cross bike did mean I was tempted by the off-road bits we passed.

I'm impressed with how much fitness I have retained, obviously the turbo sessions have worked even though it has probably only averaged out as two a week. I might even be tempted to get a turbo to help with fitness over the winter. 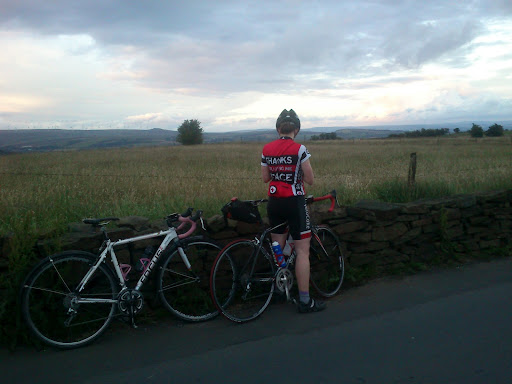 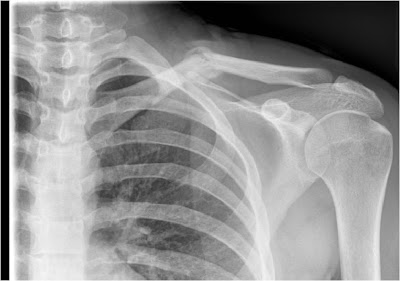 Back at the hospital today and I was really hopeful after my last Physio appointment. After X-rays I saw the Doctor and he told me that I was going to be discharged, obviously the first thing I asked about was cycling and was told to take it easy and not fall off. He also checked how much riding I had to do for work before writing mt fit note.

I won't make it as a fell runner

Ali is getting the miles in at the moment and after a week of not being bothered I thought I should get back on the turbo. So yesterday I went on the turbo first thing. Ali then headed out on her mountain bike over to Rivington and I was to drive over and meet her for lunch. Instead of just driving over I decided it was time to start my three peaks training. 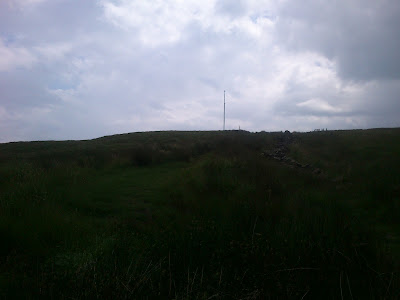 Parking on the Belmont to Rivington road I headed straight up Winter Hill, obviously without a bike at the moment but I thought that since last time I rode the three peaks it was the getting up the hills that was so hard that it would be good training even without carrying a bike. It started okay if a bit boggy and difficult to run due to tussocks but then it got steeper and steeper. Till it was almost vertical.

Although not as vertical as it looked when I downloaded my garmin as I certainly didn't need ropes to get up it.

Once at the top I headed down the shoulder as I knew it wasn't quite so steep, turns out I walked more on the way down. Probably best for my knees and to ensure that I don't fall. I have no idea how fell runners run down the hills so fast!

Out onto Belmont Old Road and back along to the car, less than two miles had taken me half an hour but I am sure I can only improve. 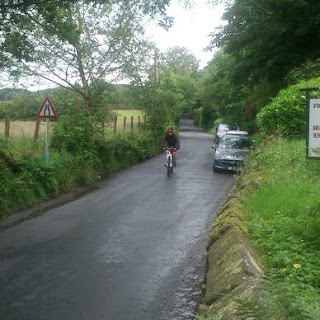 Then I dropped down to the cafe for a nice lunch with Ali.
Posted by trio at 09:35 1 comment:

Kind of riding for ice-cream

A friend seeing a picture I had posted of ice-cream on friday suggested that we go for icecream today. She mentioned she was going to do a three hour ride in the morning first and so I suggested she could ride with Ali. So at 11am the set off for their ride and I went for a run. Then back onto the turbo. I was finished well before they were back but I almost felt like I had been part of it. Then we drove over to Freddies for ice-cream.

Next time will be with a ride to Southport for chips on the way when I am back on my bike. 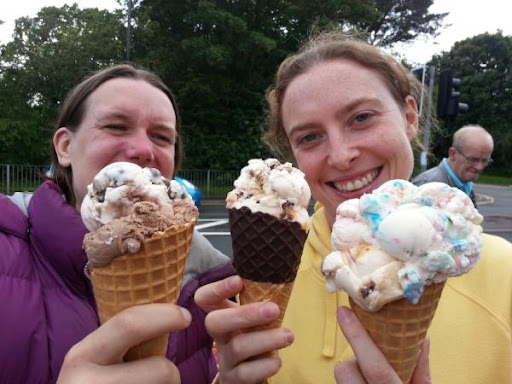