We arrived late yesterday at our little cabin in Sea Palling, it's where we stayed in February and we decided then to see if we could book it for Christmas and we could. This morning we were up early so Ali could go shopping hopefully before all the crowds and get back at a reasonable time for us to spend the day together. I took the boys for a short walk but we avoided the beach as Ali wanted to be there for our first beach walk of the holiday.

We were out and on the beach before 10am and headed up towards Horsey, it was windy but a lovely day. Once we got close to Horsey we had to leave the beach as it was covered in Seals and the boys were a little too interested and neither of us fancied getting too close. This meant a nice walk through the dunes to Horsey where we walked up to the pub. A lovely lunch where George snoozed under the table and Cybi sat looking cute so he got food while it poured with rain outside. Once it was time to leave the rain had stopped so we didn't need to put our waterproofs on!

Back through the dunes and then onto the beach once we were past all the seals. We made it back to Sea Palling just as it got dark. Now we have two sleepy dogs, George is asleep in front of the fire and Cybi on the sofa. Tomorrow is Christmas Day so more beach time but also more time in our cabin while Ali cooks us all a lovely Christmas dinner. 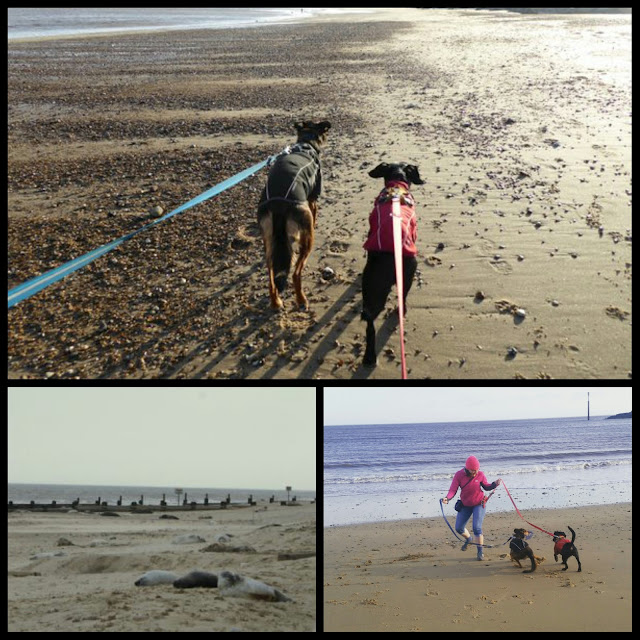 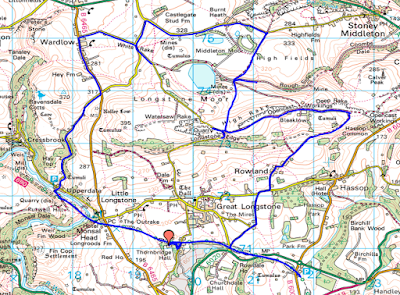 I have really neglected my mountain bikes since Cybi moved in but it's hard to find time and we have been running a lot as its something we can enjoy together. After racing bikejor with him I realised I needed to get some bike fitness back and so took my singlespeed out the other week. After noticing there was a night trailquest from Great Longstone (so not too far from home) last night I put an entry in. It's two hours of navigation with the aim being to collect as many points as possible by finding as many control points as possible. I was a little nervous about night riding seeing as its been so long and I'm not feeling very confident on my bike off-road in the light but with where the controls were they were mainly on trails I know well as they were towards my house. I planned a route and set off, grabbing the first control easily...well a little bit of back and forth at the point to spot it in the dark. Then it was time to start climbing, I was pleased with my riding making sure I didn't push too hard but felt I was covering the distance okay. I had to make some decisions as to which controls to go for near the end as time felt like it was getting tight, missing out one of my planned controls. I rolled in with 4minutes to spare and 10 controls ticked off. I was pleased with my timing and route selection. I had forgotten how much harder it is to navigate in the dark, even when you know the trails. No idea if it was a reasonable score overall but a lovely ride, 15miles in total, and great to get out on the mountain bike.
Posted by trio at 05:55 2 comments:

In last months Trail magazine there was a walking loop from Castleton taking in the Mam Tor Ridge. I thought it would make a fab run and suggested it to Vikki. Today we met in Castleton at 10am to give it a go. Turned out a lovely day for it with clear enough skies to see the lovely views.
On the way up to Lose Hill I had George who was in heaven with lots of new sniffs and blades of grass to pee on, he even had a couple of woogles. I was a little jealous as Cybi dragged Vikki up the hill, we were both walking a lot as it was steep. On the first techy descent we swapped dogs, cybi was still on one and apparently listens a bit better to me, meanwhile George was the perfect descending partner unless I got too far behind when he stopped dead! Along the Ridge is stunning and we ticked off Hollins Cross and Mam Tor itself before heading across to the Limestone Way. After some nice easy running we got to Cave Dale, slippy and Limestone so we were all walking. Fortunately Cybi had calmed down by now. This dropped us out in Castleton.

Just under 8miles and a lovely loop. 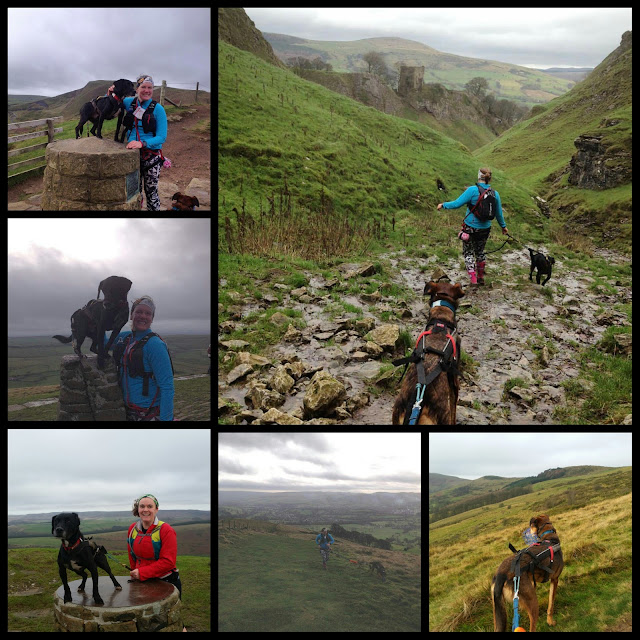 I haven't ran without least one of the dogs since the Stoney Middleton Fell Race during Well Dressing week, before that I can't remember. But I kept seeing banners for the Litton Christmas Cracker Fell Race when walking the dogs to meet Ali and decided to enter as it was close and looked a great route. On the morning Ali dropped me off to register, an easy process as I had pre entered (fortunately as it had sold out two weeks before the race). Then she parked and her and the boys walked back to see me before the start.

The race starts by going up a road climb, I really missed the cybi power at this point but it was a short climb then back down to the main road where Ali and the boys were cheering me on. We were soon in Tideswell Dale before heading up into the hills. Round to Litton Stack and then we dropped to Litton Mill. I knew the next section would be wet as it had been in Wednesday when I went round the route with the boys. Well it was a lot deeper now, I think if George had been there I would have been carrying him! It was quite fun splashing through and as always stunning. Out at Cressbrook Mill and another Road climb, more missing cybi power. Then up up to the trig point where there was a Christmas tree. But from here it was heading back.

The next bit was downhill, on one off camber bit I managed to slide over but it was a soft landing. The steep downhill into Cressbrook Dale I seemed to lose any ability I had to run downhill but knowing the descent meant I caught a few who had passed me by dropping onto the path while they were still contouring. At the bridge at the bottom there were jelly babies, just what was needed for the climb up Litton Dale.

The last bit is hard as you are nearly at the finish but instead of turning right into Litton you go right and along another muddy path to the road we started on. With impeccable timing Ali was at the road crossing with the boys to cheer me on (they'd been for their own walk) and they had time to get to the finish to cheer me across the line.

The race had a lovely atmosphere and I wasn't last, which I was worried about as there were only two behind me at the Stoney Race. I did miss the boys but could be tempted by some more fell races. 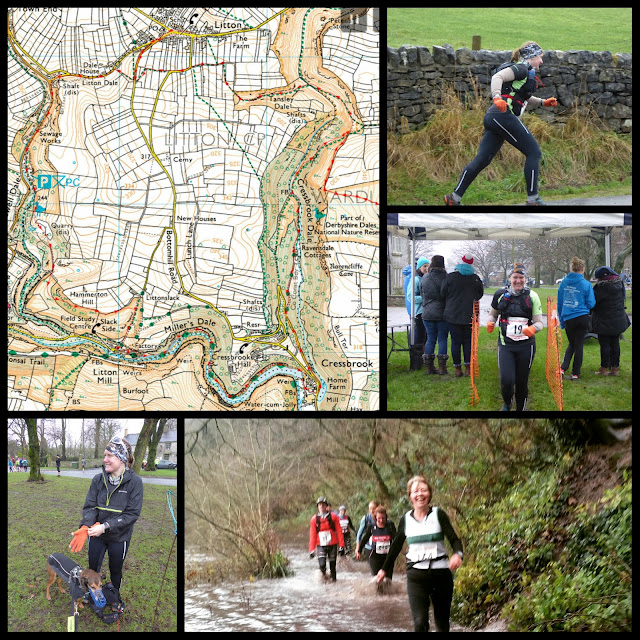 I've enter the Litton Christmas Cracker Fell Race this coming Sunday, although the route is partly marked as a fell race some navigation is required. Today me and the boys headed out to run/navigate round the route. It was nice and easy to follow and a lovely route. Some of it I knew already but the new bits were brilliant, I would never have gone up to the trig point if it wasn't for this and the views were stunning. I'm now happy I know the way for Sunday and all I have to do is run which us going to feel odd without the boys. 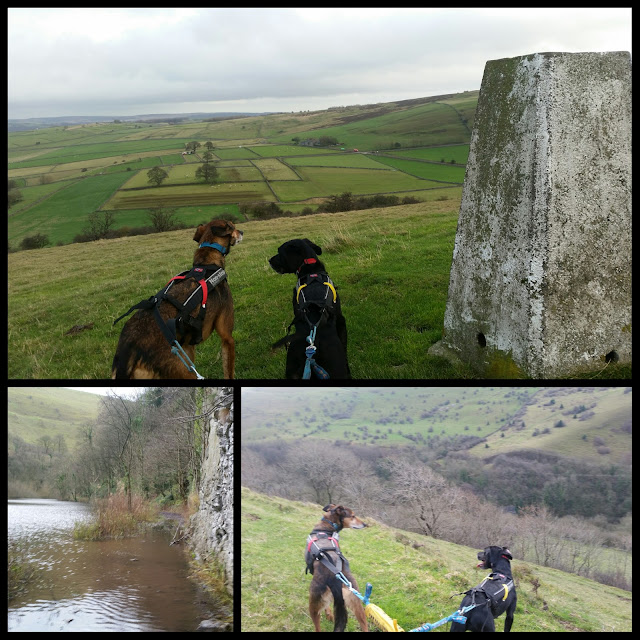 We met early for this loop as we both have car park passes that mean we can park in Derbyshire Dales car parks for free up to 11am. The route drops down onto the Monsal Trail along to the Litton Tunnel where it goes up towards Brushfield and along trails I have rode along before back to the Monsal Trail.
We made a mistake at the start and took the wrong path down meaning we added an extra mile through Monsal Dale, not a problem as it was lovely if a little muddy. The route was really easy to follow and easy running till we left the Monsal Trail where the path was steep and had us all walking, obviously Cybi and George could have ran if they weren't attached to us.
Just as we got back to the Monsal Trail Cybi saw a squirrel and darted, the clip on my end of his line snapped and he was off. Hunting for him I soon found him with a squirrel in his mouth, I can't believe he caught it! Clips have all been upgraded to carabiners now! 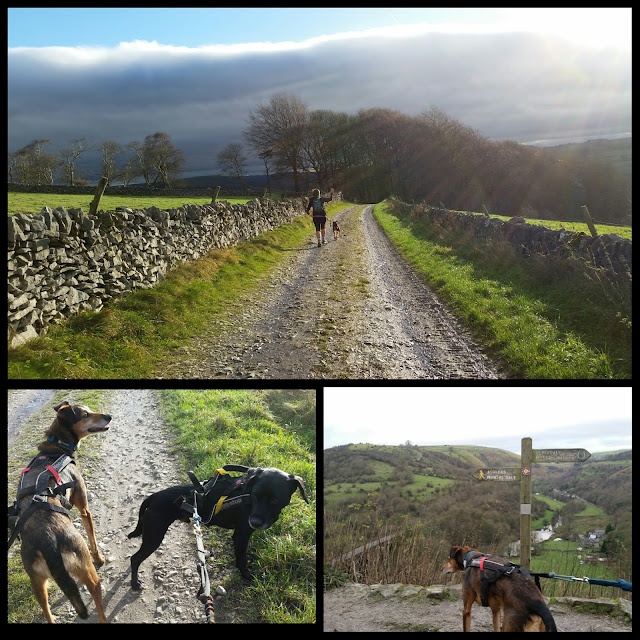