A change in the Weather 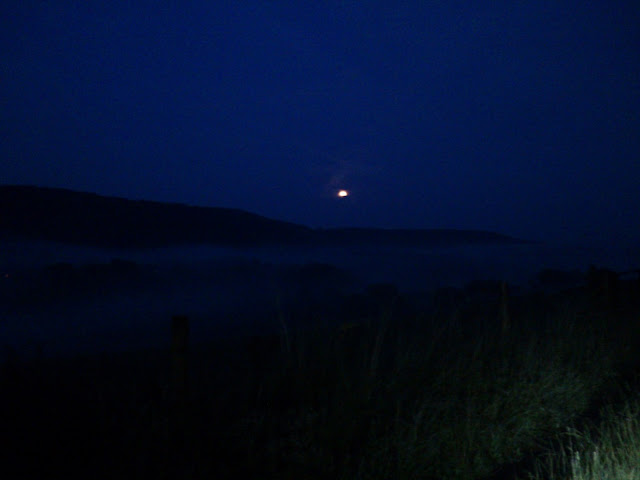 Storms and lots of rain led to flooding on the roads on the way home from work. An amazing sky as I looked down the valley, took some time to look and enjoy,
Posted by trio at 09:39 No comments: 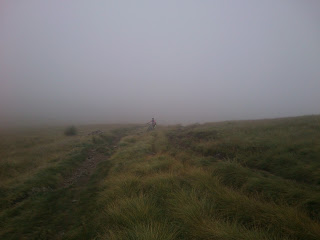 Yesterday I was starting work at 3pm so Hannah came over and we rode Cutgate. It was very misty and most of the time we were in the clouds but once again it was a fantastic ride. Right on the edge of my technical ability and reminded me I need to ride my mountain bike more.
Posted by trio at 11:55 No comments:

Finishing off #rapharising and not quite killing Ali

I had 1400m to do to finish the Rapha Rising challenge but I definitely wanted to go mountain biking and I was hoping Ali would join me for some of the ride. We decided to head over to Hope for lunch, well a late lunch as Ali was catching up with the cricket. I took her up to the Gliding club to show her two of the new trails I have ridden this week that I love. Although she wasn't feeling great her smile showed she loved the trails as well. 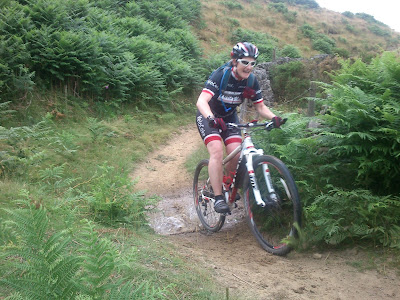 It was overcast which led to it being noticeably cooler which was nice for a change, although won't help my tan lines! 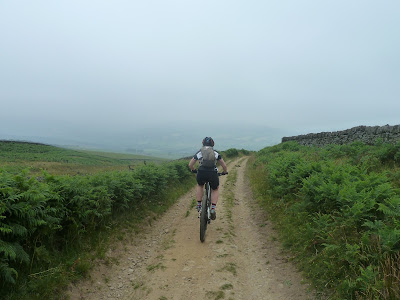 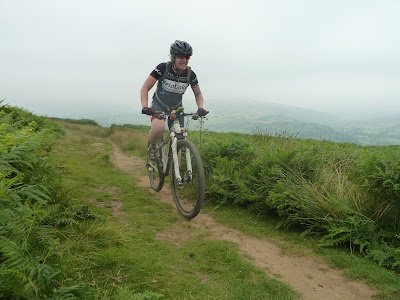 After lunch, two main courses for Ali, we headed through Castleton and up the broken road, the food had done its job and Ali was flying up the hills! So instead of heading home and me going out again to get my climbing we went right and over to Rushup Edge, I had forgotten how much climbing there was up Rushup, but it was in lovely condition. Down Chapel Gate into Edale and then over to Jaggers Clough, we went on a ride here when we first started going out on old heavy bikes so it was great to return! 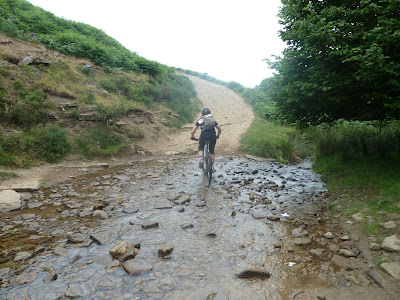 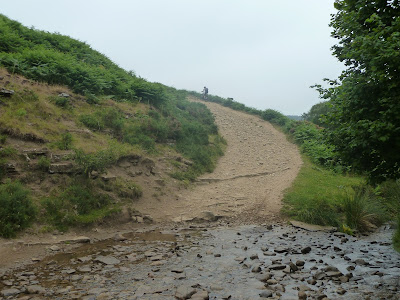 All that was left was descend, via an accidental ascent of Win HIll, my first time up there! 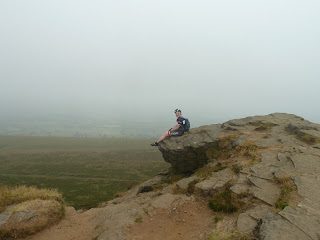 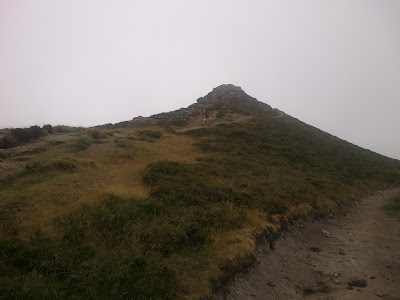 An amazing day and nearly 40miles and over 1500m climbed meant a tired Ali and the challenge complete!

While I was busy at work Ali has been working on the garden, with help from Hannah. So after a lovely ride home from work off-road I got home to a BBQ, perfect Friday evening. 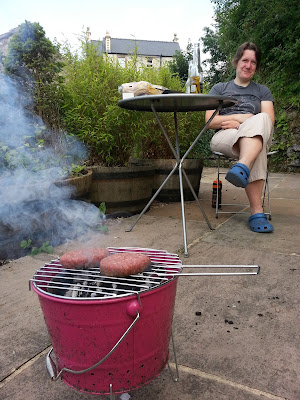 Well more like splashing about! Hannah came over on Monday to do some gardening but first I tried to kill her off by dragging her over a big hill to meet Nick and Mark from work to go for a wild swim. It was a far way to the swimming spot and the water level was a little low for swimming. 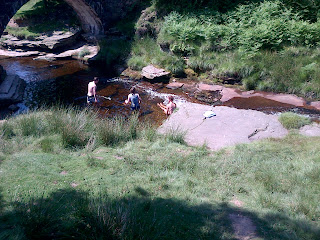 Nick jumped straight in whereas Mark and I squealed a bit before eventually getting in. It was very refreshing! 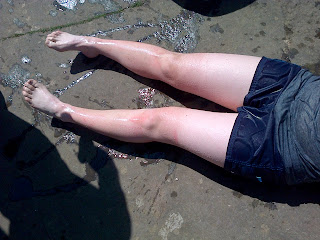 A quick lunch and I had to go to work and Hannah came and planted us a lovely garden.
Posted by trio at 06:01 1 comment:

A Sunday Ride with lots of climbing

It started as a plan to ride with Kate and Jane out to Winster to see Jumbly's new house. We met up with them at Calver and had a nice ride down via Bakewell, we actually beat Vikki to her house. But she soon turned up with cake. 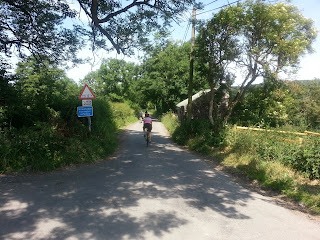 Riding back the day was lovely and after splitting from Kate and Jane we decided to carry on and maybe get some climbing in so we could do the Rapha Rising Challenge. 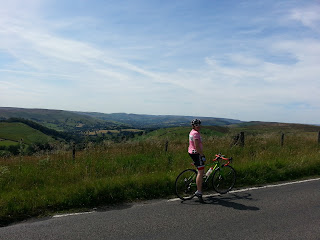 This also involved an ice-cream stop as well as lots of going down just to go up again. Certainly nice to explore some more of the roads in our new local area. 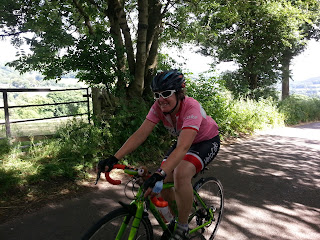 Making the most of the weather

I may be working 9 hour shifts but I want to make sure I enjoy the summer. A 12noon start today meant a ride over the moors. 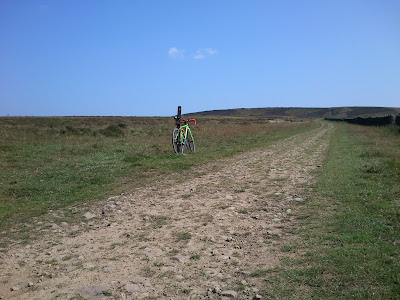 A new bridleway to me. 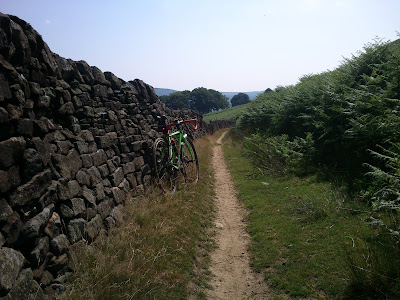 Then since it was so nice I rode home off-road as the sun set. 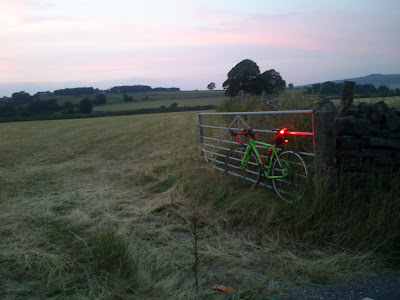 Company on the Commute

To try and help me not get so overtired (and therefore a complete pain) Ali has been giving me lifts home from work when I'm on lates and in on the early shifts. Today as well as my bike on the roof we put Ali's there as we had a plan! I rode from my work over to Ali's to meet her and then we rode home. It wasn't as sunny as the previous few days but being a little cooler was nice and it was lovely to have company on the commute (even if she is super speedy)!

With the weather being so nice I decided to ride to work off-road. Well the nice weather also means one of my favourite bridleways is slightly overgrown. Being slightly allergic to grass this meant my legs were covered in a rash all evening at work! 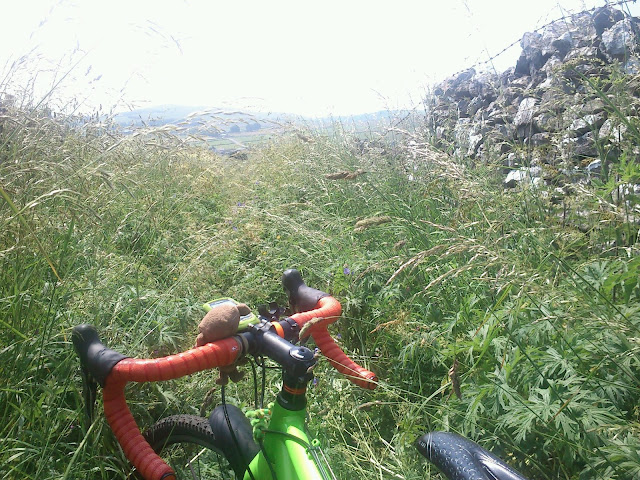 A lovely day with friends

Hannah and Norn were over for the weekend, unfortunately I was working the Sunday so missed out wandering around the Well Dressings but on the Sunday we took the bikes out for a play. The plan was to head over to Great Longstone and get on the Monsal Trail to ride through the Monsal tunnels, something I have been meaning to do since they have be opened for cycling use. We started by climbing up Coombs Dale, an easy enough climb till I suggested to Hannah we climb up the nearly vertical slope beside us (my excuse was Three Peaks Training), I was kind enough to not make her carry the bike up. 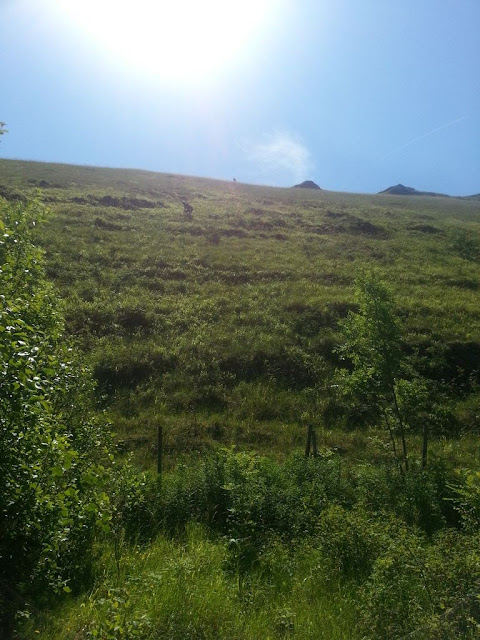 Some more pedalling and we arrived at Great Longstone, two pubs but we wanted icecream. Following a sign to the Cricket club saying there was a ladies match on we were nearly roped into playing but also got ice-lollies, perfect. Then it was a short freewheel and onto the Monsal Trail. It was busy, expected on such a sunny day, and the tunnels felt really cold when riding through them. Reaching Miller's Dale it was time to leave the trail, ice-cream first though! 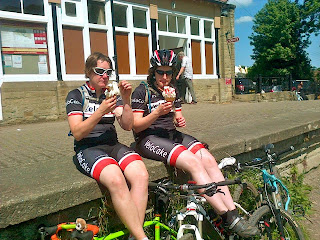 Down into Litton where we decided to eat, seeing as we hadn't had lunch and it was nearly teatime. Burgers all round! 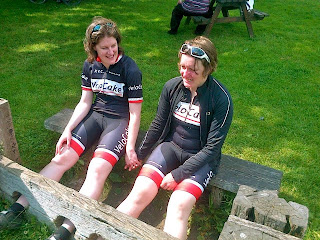 Then a nice pootle home via Silly Dale.

About 19miles in total but lots and lots of smiles.
Posted by trio at 09:53 No comments: