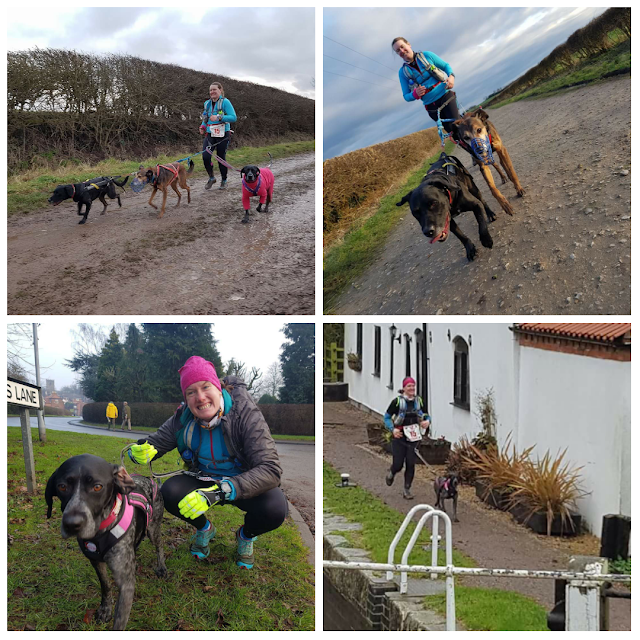 So the day of the ultra finally arrived and I wasn't feeling ready. I hadn't really done much running since Christmas and no long runs but at least I had the best team mates in the world and Ali as our support crew. The race was an hour and a half from home so that meant leaving at 6am but at least it gave lots of time for the rest breakfast to digest.

Us canicross lot started five minutes after the rest of the runners at 9:05am, a nice low key start as there weren't loads of us. I was starting with Chip and obviously she set off like she had a 5k race to win! Especially as her pal Bernard was up front. Soon she settled a bit but was pulling hard so I tried to go with her as much as I could without killing myself. The hardest bit being a ploughed field where most people were walking so we had to do a lot of overtaking. Once on the canal we found our spot though. Here it was surprisingly muddy and I was sliding a lot. Once or twice I thought I was going to end up in the canal! I kept seeing jen and Laura with mav and echo, they were running faster than me but maybe stopping a bit. Before long the support crew were there cheering and then Ali was there with George. We trotted past the first feed station as I'd made sure to carry enough water and food and before long Ali popped up again, this time with Cybi and George. Chip was super happy to see them. I shared a mini pork pie with chip as she ran and she was running like a pro. At about 16miles I thought she was licking the grass so tried to persuade her to have some water. Then I realised she may have been eating it. Another pork pie and she was back into pro mode. We came across a metal bridge and she stopped, I carried her across and would have done anyway as I would have been worried about her paws going through one of the gaps. Onto 19.5miles where Ali was waiting with Cybi and George to swap over. I set off feeling sore but fine and we went onto the Trent flood bank. After a mile we were running into a freezing headwind and I was really struggling. I had to walk for a while and got some more food into me. George took the opportunity for a woogle since I was walking. Back running and we reached a stile, Cybi popped straight over but George refused. A nice man picked him up and lifted him over which George loved as he loves men! Turns out there were lots and lots of stiles which I ended up lifting George over, a couple Cybi even struggled with. Then on the last one there was a gap underneath so George went underneath and Cybi over, nearly hanging himself in the process!

I was really struggling now and doing lots of walking. I was looking forward to seeing ali but she wasn't at the next checkpoint, half an mile later and there was her and chip to chivvy me along. Cybi was being a star, walking sensibly when I walked and pulling but not too hard as then it was too much when we ran. He was constantly checking on me and really looked after me. I saw Ali again 2 miles from the finish and then she was there with chip just before the finish who joined us to cross the line. 31.5miles in total. My longest run ever by some way! U even managed to finish just before it started raining.

It was a great day but I really suffered for the last ten miles. If I do another one I definitely need to get more long runs in. Today my legs are super sore. My four legged team mates were amazing and Ali as always was the best support crew I could wish for. Now to recover.
Posted by trio at 19:17 2 comments:

I'd seen that there was a doggie duathlon running but I was a bit worried about how any of mine would cope in transition, one of the organisers reassured me and Chips foster mum was going to be marshalling in transition so I decided to give it a go. It was down in Gloucestershire so me and the woofs headed off in Bumble on Friday to camp up on a farm where the race was taking place. We got there before it was dark so I could pre-ride. The course was very short (1.1 mile bike and 1.1 mile run) due to the ground conditions being hard work for the dogs. The bike it was fine with a hill from the start and a long draggy hill halfway round. But the canicross section was so muddy I ended up carrying my bike. After the preride I got the awning up, took all the woofs for a walk and then we had our tea. As it was getting cold we all curled up in bumble nice and early, me with my book. 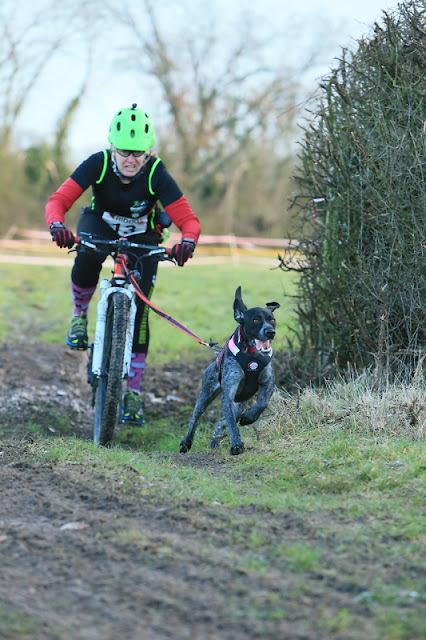 Saturday morning and it was cold (3 degrees in Bumble) and the ground was frozen. After briefing they took our bags over to the transition for us, mine only contained my canicross line as I had put flat pedals on my bike to make transition quicker. Before I knew it it was time to go. Chip knows what is happening at the start now and dragged me up the first hill. She listened well to her directions and before long we were arriving at transition. I felt like I was faffing but we were soon out and running. The final field was no longer a muddy mess but so frozen it was hard not to go over on my ankles. Finishing I was really pleased with how we had both ran, although Chip looked a lot fresher than me. Turns out we had managed to finish second female.

In the afternoon they ran a second race for people who wanted to race a second dog, it was entry on the day so I entered with Cybi. As always he was a little start but the ground was a lot muddier so a lot harder going and he really was tiring on the run. It was great that he got to race though as he does find two days a bit too tiring now he is getting older. 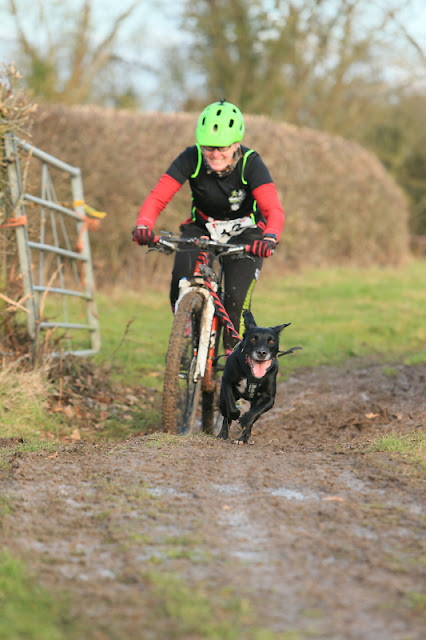 Day two and the conditions were super muddy we also missed our starting time due to me dropping Chip's lead and her deciding to have zoomies. Amazingly she still was able to pull me up the first hill but the second she lost a bit of confidence and stopped pulling, I think it may have been the ground being so heavy going meant I was slow. Out on the canicross section though and she was flying, super strong and due to starting last we had to do some overtaking, which she did like a pro.

At prize-giving I was chuffed we had held onto second, just by a couple of seconds, as we were slower today and came third on the day.

A fab event, the next one will be a triathlon so I need to persuade one of the dogs they don't mind swimming too much.
Posted by trio at 14:03 1 comment: