A while ago I read about park run which is a weekly free timed 5k run. My local event is at Heaton Park and I had been thinking for a while I should go along. I find that a race situation makes me work harder than I ever would on my own. So since I couldn't get to the cross race today I made a plan to go. I had asked Ali if she fancied it but after spluttering over the start time she said no. Last night she did say she would drive me there though - which was good when left to my own devices I get too scared to go! We got there with lots of time to spare so I could wander round and feel scared by all the fit looking runners. It wasn't long before we had our briefing and were moved to the start. 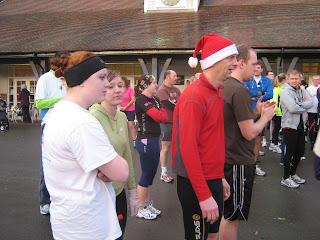 Next thing I knew we were off and running, I dodged round a few people and got into a rythmn. Looked at my Garmin and it didn't have my heart rate - must try changing the battery this is happening a lot at the moment! So I just went off feel, the first km went by in 5minutes and I was a little worried that I was going too fast but I think that there was more downhill than uphill in that section. I tried to keep up with the guys in front of me but they got away in the 3rd km, looking at the splits I was a lot slower here but there was also the most uphill. From then on I got back onto a good pace and just hung on to two lads who had gone past me. 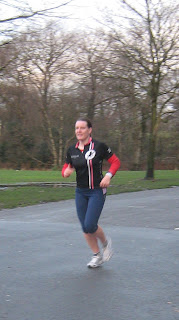 The last bit round the lake was a little muddy and I did my one bit of overtaking going past a lady who was avoiding the puddles as I splashed through them. Round the last corner and the marshall was saying to push as we were nearly done. Next I heard Ali I was trying to run hard but my lungs didn't feel like they were getting enough oxygen. 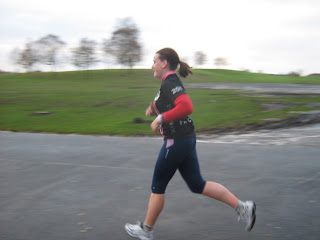 Finished and I was handed a metal tag which I then handed in and gave them my details, my bar code I had printed didn't scan (must try printing again) so they had to type the number in. My Garmin had a time of 26:15 - I was hoping for under 28minutes so I was very happy with that. A quick look at my blog shows last year I ran the Gill Pimblott memorial 5k trail race, last year in 24:55 so it's not quite a PB. Guess my aim for next time is to go sub 26minutes then!
It was great fun and Ali says she is going to cope with an early morning and run it next time. My plan is to get there on free saturdays, probably ride over in future now I know its not so scary!
If you have one near you give it a go!
Official results:
Distance: 5k
Time: 26:16
4th female (27 female finishers)
(61/104 finishers)
(Pace: 8:28 min/mile)