A bunny for Christmas

Post written on the 16th November 2009 but published later so as not to ruin the suprise. 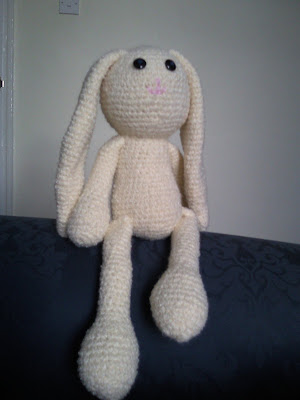 I've been crocheting for a couple of years now and it all started with Hats. The problem being that all my family now have hats and scarfs so something new had to be found for this year. I nearly always buy my sister a cuddly rabbit for Christmas so this year I decided to make one. Some searching on the internet and I found a pattern. A couple of weeks later and he was finished. It is my first time making a stuffed toy and won't be the last as I now have lots of toy stuffing to use! Maybe I bought a little too much!