Today was a Christmas Girlie road ride that had been organised by the power of twitter.  What started out as a vague idea ended up with a date and idea of where to meet.  A month or so ago I plotted a vague route and this week the time was set.  I realised last night I should download the route onto my Garmin and maybe print a map.  It was actually the last thing I felt like doing last night or this morning, but since I had the route I knew I had to be there.

So up this morning and porridge made I set out to ride over to Rivvy barn, Ali decided to drive as she was aching all over after running yesterday.  The ride over was lovely and it looked like it was going to be a fantastic winter day, cold and crisp.  I got to Rivi and located Kat, and soon we were all assembled.  It's wasn't hard to work out who was with us as we were the only girls with road bikes around.

Out of Rivi and over towards Adlington, Ali managed to find some ice and we had the only crash of the ride.  At this point I had to keep my fingers crossed the rest of the route wasn't icy as I really couldn't remember what I had plotted and if I had even ridden most of the roads before.  (At one time I would have just pre-rode the route but I don't have time for long road rides these days)  As it turned out the rest of the roads seemed fine. 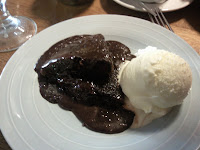 Just as everyone was being to ask the cafe turned up!  It was packed with male cyclists who seemed to find us very interesting.  After ordering lots of food, we played the squeeze as many chairs round the smallest table game!  I of course had to have the chocolate cake - which was delicious!

At some point some sensible person realised the time and we left so as not to be riding in the dark, although I think nearly all of us had a backup rear light.  I had managed to plot a way back with no major hill to get over so it wasn't long before we were on the outskirts of Horwich and then back to the barn.  Here we headed in different directions, some back to leeds or skipton, me to ride home and the others to a friends for mince pies.

Although I was not in the right frame of mind for the ride and glad to get home.  I had a good time and hope we repeat it - as long as there is cake!