Head out to meet the boys at Rivi barn, I have to admit that it took a bit to drag myself out into the big outside world!  An easy route over although I was a little confused that they seem to have resurfaced the bridleway from barrow bridge by making it all muddy!  Be interesting to see what it looks like in daylight.  I got there just as Simon was unloading his bike.  Five of us set out, three of use on singlespeeds.  Up through Chinese gardens and round the pike, misssing out going up to the top since we couldn't see anything. 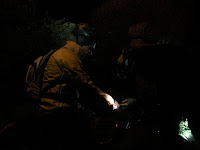 Along Georges Lane and we had the first mechanical just as the tarmac headed up, Simon's chain came off and we all sped past him.  After a while I went back down to find him looking at his bike oddly.  The chain was no longer in the rear mech!  So Jockey Wheel out, chain in we were on our way again.  Up the road to Winter Hill, wow that bottom section of tarmac is tough, I was close to getting off and walking a couple of times!  Near the top Giles and Simon were pulling away, since they don't know the area me Johnie and Donk turned our lights off and backed off.  Amazingly they kept going not bothering at all.

Off Winter Hill on a new trail to me, most of which I walked.  I just couldn't see enough to ride it, the mist meant my lights were reflecting back.  Jonnie had a couple of offs on this section as he tried to roll a 4 foot drop off or ride by feel alone.  Including one point when him and Si ended up rolling round on top of each other!  We dropped onto the Belmont road and started heading over to Leadmines.  By this point the conversation had got weirder and weirder! 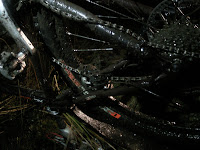 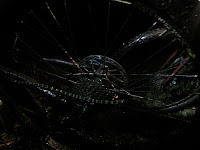 Here we had the next mechanical when Donk snapped his rear mech clean off, no idea how as we were just riding along.  Time to singlespeed his bike.  He found a gear that gave him a reasonable chainline, got the chain to be the right length and set off.  The rest of us enjoyed some mince pies while he was working on his bike, I did save him one!  Stopping again the chain was moved to another cog and the wheel put in straight, only then it jumped.  So back to the previous setup and just ignoring the fact the wheel was slightly rubbing the frame - it got him home!

Next it was my turn with a rear wheel puncture.  The boys were so amused with my tiny pump that Donk insisted on pumping my tyre up himself, thanks!  The last bit was a steep drop, I rode it but I'm sure they could hear me screaming in Blackpool!

After that it was back to lower barn where we left Giles and Simon with their cars and Donk and I headed up chorley old road.  I went through Barrow Bridge, he stuck to the road, not wanting to chance his luck with his new singlespeed!

A great ride and I went from wanting to hide from the world to having a great night ride.  Same time next week, but fingers crossed for less mecanicals!