Not my finest day commuting 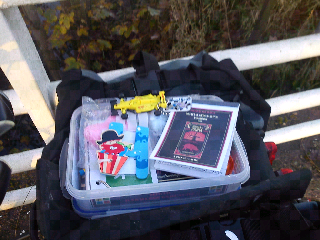 Working in Southport today I had an early start, not ideal after a late night the night before. I was awake well before my alarm and even had time to make Ali sandwiches before I left. I'd brought a couple of travel bugs with me to drop off and had chosen a premium member cache as I really don't want them to go missing. The weather was nice, although once over Parbold Hill I had to add another layer as it was colder there than Bolton. The roads were also very muddy and my mudguards were getting clogged.
Leaving the geocache my Garmin tried to take me down a muddy track, I knew I would be walking so I followed roads which unfortunately brought me onto a dual carriageway and somehow my 29mile journey turned into 33miles.

Work went quickly, I was teaching level 3. At lunch we headed to the chippy for lunch since we were by the seaside.

Leaving at the end of the day I was looking forward to the ride home although I wanted to avoid parbold hill as its steeper from that side. After my usual faffing I headed out and soon had to take a layer off. I was on some really muddy roads and I could see winter hill in the distance. I had to ignore my garmin several times as it tried to take me down muddy tracks before having no choice when the road just ended at a track. Please to get on tarmac again I turned left as right had a dead end sign, slowly I started to recognise things before I realised I was back in Southport, yes having ridden for an hour I was nearly back where I started.
It was fine though, the weather was nice, so I text Ali to let her know I'd been dumb and made sure I headed the right way. Finding signs for sustrans route 91 I was happy as I knew that basically took me to Adlington. 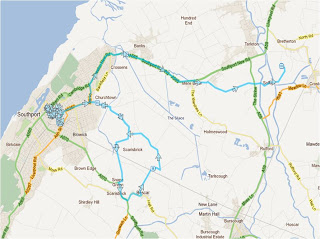 At some point the battery light on the back of my Six Pack had started flashing, so I unplugged the rear light and hoped I had enough juice to get home. As it turns out the light may have an amazing battery life but I can't run it forever (two night rides and the audax) without charging it. On a singletrack road it went out, pitch black. Ali responded to my plea and looking on my garmin there was a train station just over a mile away so we agreed to meet there (after losing my wallet last night I had no card to pay for a train). All I had to do was get there. I have a very cheap cateye on the bars just incase but it casts no light so it was riding using the force. Getting on a slightly busier road every so now and again a car behind would illuminate my way but those coming towards me just left me unable to see.

Finding the station, I put all my layers on and waited. I think the local youths thought I was a little odd. I was so pleased to see Ali and the car.

Working in Southport tomorrow, think I may try and do a better job of route finding!