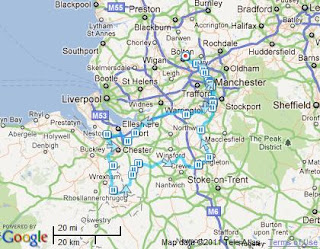 I just got my entry in for this Audax before it closed and I was really looking forward to a long day out on the bike. Obviously racing CX yesterday wasn't ideal preparation and I was unsure how I'd get on with such a long ride. I haven't done any long rides recently, although long commutes have been fine, if not particularly fast. To make things a little longer I planed to ride to and from the start, nearly 20miles each way.

I didn't sleep amazingly after 1am, constantly waking up so in the end I got up before my alarm. Breakfast and I was out the door. It didn't take me long to feel hot and the showerproof came off. Riding through Manchester at 7am was interesting with plenty of people making there way home after a night out. Getting to the hall in Cheadle I bumped into Rich and Shona from keep pedalling. I grabbed a couple of biscuits, got ride of another layer, I was now in 3/4 bibs and a long sleeve jersey, and it was time to head off.

The first section was the usual sprint and I concentrated on just holding my line and staying on the wheel in front. Eventually a hill split us up a bit and a front group got away, I settled in the second group which was being led by four lads from sheffrec cc. Taping along at what I thought was a good pace Rich and Shona sped past. But we saw them again at the first info control. From here the Sheffrec guys raised the pace and I worked to stay with them, they suggested some people came to the front but I was the only one to take them up on the offer. As we neared the cafe the pace went up again and we got there with barely any queue.
It was my first visit to the Eureka cafe and I wasn't disappointed. Beans on toast, a hot chocolate and a 7up before I headed out on the road. I was riding with a guy called Paul for a while but when the Sheffrec lot passed I grabbed on. We worked pretty well together and made good time to the next cafe, the Ice Cream Farm. My legs were a little sore by this point and I didn't have ice cream, instead a chicken peri peri baguette. We'd been seeing a lot of Rich and Shona and they arrived at the cafe only minutes afterwards.
Leaving the cafe I managed a good turn on the front. But any slight hill and I went backwards (something to work on) I wasn't the only one finding the hills hard although H was on a fixie (I hadn't been brave enough to bring mine). There was one last stop at a petrol station where I inhaled more food, before the last 30km back to cheadle. The pace was high now and it was all I could do to hold on. My garmin was so useful now it was dark!

Back to the startal and soup was served, Rich and Shona once again just behind us. All that was left was to ride home. The three of us rode into Manchester and I kept waiting to completely die but I made it home 20mins before i'd told Ali I would be home.