Been an odd week with having monday off, then working close to home on tuesday. So close I came home for lunch as Ali was at home. Yesterday I was only working in Horwich so it was another short commute. I had got up early with the intention being to go for a ride but it never happened. I spent the day feeling like I had never woke up. After work I needed to go shopping, tesco was only a couple of miles from the school, but I knew I needed to ride so I went straight-on instead of turning left. A loop past freddies and over to red rock, which is hard work on the fixie, back via aspull where I decided to get a couple more miles and headed to Adlington and then back along the A6. That wasn't much fun as its all coned off so nowhere for traffic to overtake. I got to Tesco with 18miles on the garmin. 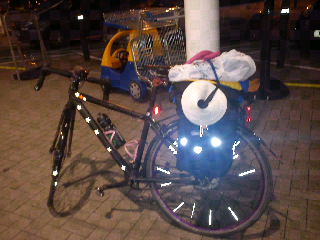 Since i've got panniers I always get a trolley, hard to carry them and the shopping. Once again this led to me buying way too much. I don't have much spare room in the panniers anyway with all my work stuff in. So once again they were packed and stuff strapped to the top. As the shopping included two big bottles of beer and an orange juice it was a little heavy. Maybe it would be easier if I just used my bigger bags?