A long day in Border Country

After the Cross Bay Half we had a night in Arnside and a lovely morning walking along the beach, or hobbling in my case, before heading up to Kielder. We've had a couple of nice holidays there before so I was really looking forward to it. Tuesday I was still hobbling so Ali did the Deadwater trail and I sat and read near the castle. Then we both rode over to  Leaplish to the Squirrel hide, no red squirrels though. But I think the 11miles on the bike probably did my legs a world of good.

Wednesday it was time for a long ride, Ali wanted to have another good ride on the Kielder and Newcastleton trails before Kielder100 in September. We set off in a cloud of midges just before 10am, well we were on holiday so we had to have a cooked breakfast. We started along Lakeside Way before climbing up on the Lonesome Pine trail. 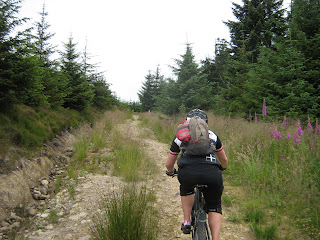 Lots and lots of up before we reached the boardwalk, where we turned left onto the Bloody Bush trail and towards Newcastleton. The day was hot and muggy but the views were amazing. Unlike last time Ali didn't set off too fast, getting me to set the pace. So over at Newcastleton she was feeling fresh! 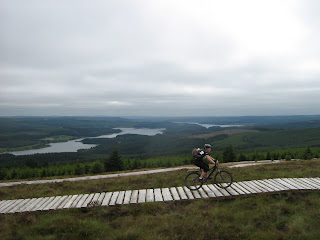 We did a lap of the Newcastleton trails before dropping down to Newcastleton itself. We parked our bikes outside Copshaw Kitchen and headed inside. I was in heaven, there were so many cakes. I ordered beans on toast but Ali went for afternoon tea. She got so much food, I was really jealous! 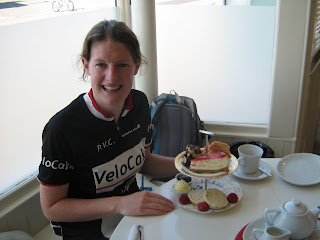 I did have chocolate cake, but her sandwich, cake, scone, and tray bake looked amazing. She then had to ride back up to the trailhead at Newcastleton with all that in her tummy. But if you are in Newcastleton it is one of the best cafe's I have ever been to. 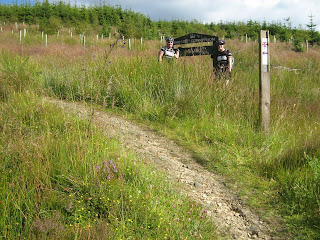 It wasn't long till we were at the border stone again, obviously after more singletrack, and it was time to head back into England. Just after crossing the border there is a steep climb, Ali hit it as fast as she could before rolling backwards into a very prickly tree. She let me take a photo before saving her! 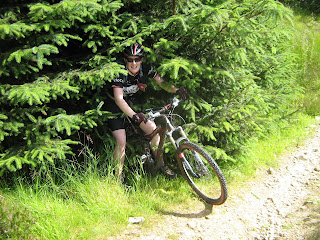 Back over and back up to the top of Lonesome Pine before down to the castle, with 50 miles on the garmins (well mine Ali's had ran out of battery life) I suggested riding the blue (Osprey) trail as it was apparently 8miles. After 4miles we came across a sign saying it was another 8miles form that point. Still it was a great 12miles with some lovely singletrack, not sure I would recommend it for hybrids though.

Back to the hostel with 63miles of riding and 2300m of climbing and a very tired Ali.

When is our next holiday?