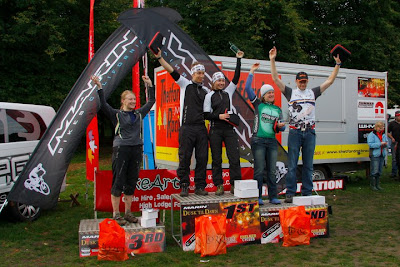 The last time I got so muddy was at Hit the North in 2008, this time though I wasn't riding solo but as part of a mixed pair. Rob Lee had asked if I fancied it and never one to say no I was there. The race is in Thetford forest down in Norfolk so I drove down on friday night and stayed with Ali's mum. She did that great mum thing of spoiling me so when I headed over to Thetford I was ready for the race and had a parcel of food to keep me going. Getting there and wandering round I wasn't seeing anyone I knew. The camping was also away from the Arena so I wasn't sure where to set up. Rob found me wandering round and fortunately recognised me...he looks a little different without his riding glasses and helmet on. We found Josh who was riding Solo and set up there.

It seemed no time at all and it was time for the start. I was glad Rob did the first lap as it looked crazy. He was up on the 2nd row and they were led round a short loop by the quad which came back through the arena to fireworks before heading out on the lap. There must have been over 300riders all trying to go as fast as possible and not crash. He came round after 50minutes looking strong and headed straight out for a second lap. Waiting to head out for my first lap I was hearing tales of mud and how hard it was. But there was no time to worry about it and as soon as I was on my bike it was head down and push. The first lap I rode as hard as I could on the fireroads and basically held on for dear life on the downhills. I came in and sent Rob out again, he came through looking strong and headed out for another lap. This time waiting for him I began to get concerned, the course had slowed but I was expecting him in by how. When he came across the line running, rear mech bust. Out I went and the course was even muddier. There was little difference between the fireroads and the singletrack, I had a demoralising moment when a girl came past me running! But I had to ride my own race and for me staying on my bike makes the most sense. Rob went out again, a little slower again and then I was out, I knew this was to be my last lap and we were comfortably in 3rd, 2nd were maybe catchable and 1st miles ahead. On a fireroad I went past the girl I thought was in 3rd, so I knew I couldn't let up. Back in and no sign of Rob, back to the tent and there he was all ready to go. Out he went and I got changed into clean dry clothes.

We finished 2nd with 9laps. A lot of people had stopped and I heard tales of 3hour laps so I was happy to have stayed under 2hours the whole time. I want to race there again in the dry as I think I could have been faster. I was struggling so much to ride in the mud I couldn't push as hard as I know I can. It was great fun though. The hardest thing of the weekend was the drive home. With no Ali to drive me I had to stop numerous times, twice to get some sleep as I was worried I was about to fall asleep behind the wheel. A four hour journey took 7hours in the end! Still it was worth the journey, next year I'll take the monday off and stay in Cambridge.