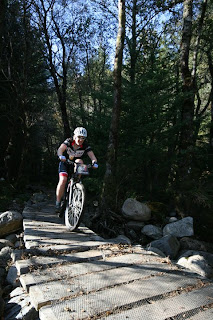 It seems ages ago that Chris suggested we pair up for this event. He has raved about no fuss events in the past and I thought it sounded like fun. I had already realised after D2D last week that mixed pairs is one hard category. Our plan was to ride for an equal amount of time as well which would make it harder, often the bloke does more riding. But I was determined that we should give it a good go to get on the podium, winning it being the ideal outcome. Mike was kind enough to drive us up and more importantly drive us home. So we set out early on Friday, a stop for burgers at the Drovers and we got there with plenty of time to get a good spot. We were right next to the track so we could swap over here. This was fantastic in the middle of the night as you could stay wrapped up in a sleeping bag till the last possible minute.

As always I didn't get the best nights sleep on the friday and I was very nervous on saturday morning. Chris was the complete opposite and completely laid back, I think him and Mike found me funny! Before we knew it the race started. Chris sprinted the 100m run and got into a good position on the bike. He then went on to do the first lap and a half, coming through up in the top ten. No pressure on me then! I headed out and straight up the 4X course. Who thought that would be a nice climb! I enjoyed the course although it was pretty technical, lots of squealing and screaming from me. The first lap I did at least ride everything. Chris out again and another fast lap. We kept going till night time. We were in 2nd at this point by about ten minutes so we had to keep pushing. Through the night we ended up chatting to the girl in 2nd, turns out they had the bloke out doing doubles. We could only hope this would tire him out and that we would stay consistent. The night was hard, coming in and eating as much as I could, drinking loads and trying to stay warm before heading back out and trying to ride fast. At the end of the night Chris put in a double, my lights were both ready to die as I had done over 6 hours of night riding. This pulled us back up into first by a minute. The race was on. There bloke kept catching me, then Chris would move us back into 1st. 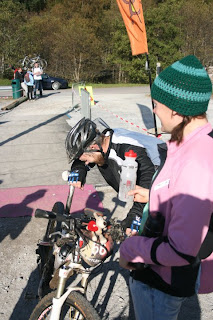 Going out for my last lap, knowing Chris would have a lap and half to do, I knew that I had to stop the gap getting too big. I knew which bike he was on now so when he came past me just after the last technical descent I put my head down and tried to hang on. 10seconds was all I lost so Chris was able to storm round. I was basically collasped in a heap. Chris of course thought he was right behind so kept pushing as hard as he could. He basically collasped across the line. But we had a ten minute lead in the end.

It was one of the closest races I have been in and certainly one of the hardest. It was good to be pushed so hard and there is no doubt that mixed pairs is a hard category to race in. 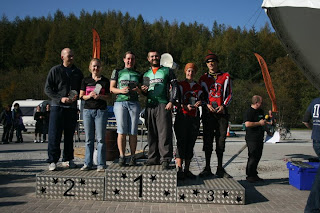