So I had planned out an epic, the idea being that we would ride about 100km before finding somewhere to sleep for the night. We had gone for different methods of carrying our load, mine was the same as last time only I had lost some weight from my back - which was nice. Jon had decided on paniers, after a few goes at towing a trailer before.

We set off in the drizzle with full waterproofs on. The first bit of off-road was a nice muddy walk up a fell and back down again. 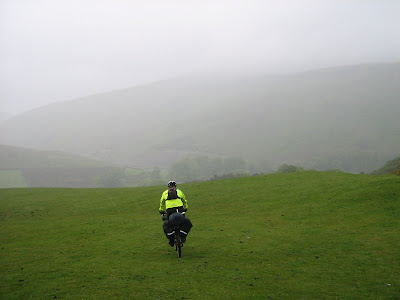 Slow progress but smiles all round till we got to the vertical muddy slope! At this point my method looked best as I picked my bike up on my back and feeling a little smug I had hiking boots on I carried my bike down. Jon on the other hand had fun with his fully loaded bike getting down! Then it was the next fell, Dunsop Fell. We walked and walked and I carried my bike for the last bit, everytime I looked back Jon was having fun with his heavy bike! At the top I was looking forward to riding, but no now the terrain was a complete bog. At some point I mis-judged how wet it was going to be and ended up completely in the bog! 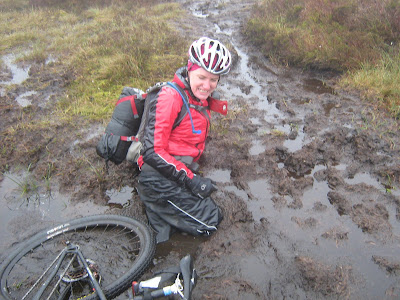 Originally my bike was on top of me and I couldn't shift it, Jon had to move it, it took a lot of effort to get out - almost like a swimming motion! I was most impressed not to lose a boot! That would have been terrible! 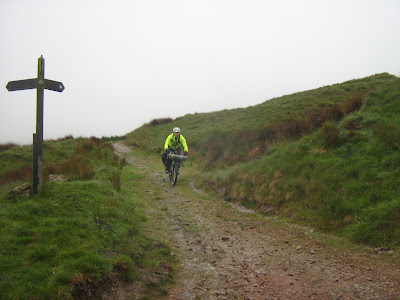 Fortunately the downhill was nice off the top, think Jon enjoyed it once he got used to the changed handling of his bike! At this point I was beginning to think the whole thing was a bad idea, the map had got wet! I realised how silly I had been not bringing the waterproof maps of the area that I had used when plotting the route (for some reason since I didn't have maps of the whole route I didn't bring the two I had!!!) I had a copy of the route we were doing but the map holder was less than waterproof so it became a bit soggy. So instead of heading up over Salter Fell I had us drop down into Slaidburn. At this point I thought it was time for a new plan so Gisburn Forest was the new destination. We headed to another cafe near the forest and wasted a few hours in there watching the rain getting heavier and the wind stronger. After chip butties it was time to head out. As we got into the forest something amazing happened and the sun came out and it stopped raining. I insisted we rode around for a while, whereas Jon wanted to stop and get his tent out asap! In the end we found the wet weather shelter then back-tracked to find a nice spot.
This was the moment of truth, would any of my stuff be dry, I had a text from Ali offering lifts, so although there was no mobile reception I knew there was a payphone only a few miles away. Always nice to know if everything goes wrong!! As it turns out all my dry-bags worked! Even the one on my bike and most exposed kept everything dry. The only bit of damp was a bit of my down jacket - its dry bag is a little too small so I hadn't rolled the top shut as well, going to buy a bigger one and that will be sorted! I got comfy while Jon spent his time pitching his tent! 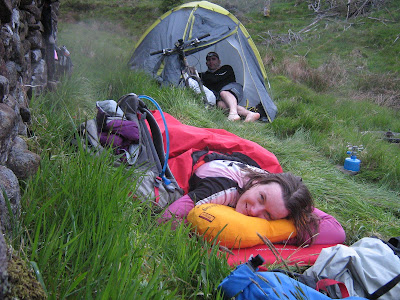 As you can see Jon made sure he had room for his tent and I was left outside!
At this point I wasn't sure what to do, I had thought I would be riding/in a pub till dark. So I cooked my not very nice tinned spaghetti. I think I should of had the other tin I bought but at that point I thought I would have both! 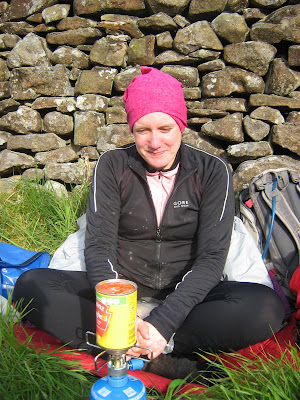 The insects came out to bite not long after and Jon decided to hide in his tent. Ar this point I decided to get in my bag, first I removed a slug off my mat. I was beginning to wonder if I would like being outside afterall, especially when it started raining! I got all curled up and on my side, sleeping bag closed, bivvy too with my face covered. I kept checking to see how heavy the rain was and it seemed a steady drizzle. Eventually I fell asleep and slept till just after 4:30am, when it was light. I woke up felt a little cold, but fine, my shoulders were a little damp. So I put an extra jacket on - I had kept some extra clothes in my sleeping bag! But still had to get up as I needed the toilet. As I got back in a Jon surfaced and sounded like he was about to cook breakfast and take his tent down, something about it leaking, I went back to sleep though. He then took his tent down and cooked breakfast, still not sure why he took the tent down, even a leaking tent is better than nothing. 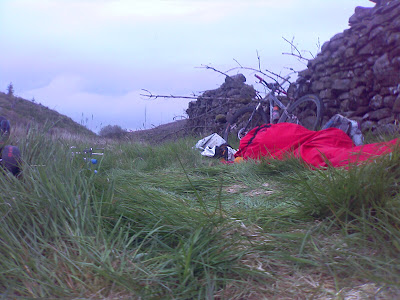 I surfaced again at about 7:30am, packed up and headed to the dry shelter, since it was still raining. I was impressed I was dry as I was sleeping in a puddle when I woke up. I can definitely recommend the alpkit bivvy! Once at the dry shelter I got to work on my breakfast. At the last bivvy Kate had pointed out how much my milk weighed. She suggested powdered milk as the alternative. So that is what I did, I mixed it up in a little bag and poured it on, it worked fine! A great weight saving tip!
Thenit was off on todays ride, we got back on the route I had planned and a mixture of road and walking through boggy fields brought us out on Waddington Fell where we dropped down to the cyclists a cafe. A nice feed and then country lanes all the way back to the car.
A great trip and I'm impressed with how well my kit stood up, just a couple of bits I want to change.