Today was the second event in the Hope Race Series up at lee quarry and organised by brownbacks. I couldn't make the last one but definetly wanted to be at this one. The decision had been made to take rigger and it was an early start as I needed to ride over since Ali is away with the car - my mum actually offered me a lift last night but it is a long way for her to come to take me to a bike race! I was very cold waiting for the race to start and was beginning to wonder if I hadn't worn enough clothes, but once I was racing it was fine. We set off and it took me a while to get going, all the people round made it hard on a singlespeed, I was passed by the other two singlespeeders on the first climb and I knew there were at least two girls ahead of me. One of them was my friend Molly who had won the category last time. On the first two laps I could see her in the distance which had me pushing, the third lap though she got away from me and I couldn't see her. I think this is the lap I slipped off on a rock, fortunately to the side that wasn't a cliff! Turns out Molly had fallen the lap before hence me getting closer to her. The next two laps I started making inroads on her again, but I was thinking I was running out of race. I think Enduro stuff suits me more than flat out for 1.5 hours. On the last lap I hit the last hill with her only 10m or so ahead so it was a hard effort, then on the flat where she had been gaining I just sprinted. I caught her on the next hill where we were both pushing, I think she had the edge there with all her running! Followed her down the next singletrack section and then went for it on the next flat section, she was there for a while but the next glance I had 5m, I pushed hard up the hill, 10m, then I heard "my seat post is broke" - shame as it was really close. But it meant I was less worried through the last singletrack section. I finished just a few minutes ahead as molly crossed the line with her saddle in her mouth!

Turns out I was the second singlespeeder back and 1st in the women's weekend warrior category for which I got a fab trophy. I'll be back for the next one an I recommend everyone has a go, if you are a racer already there is a category for you and if you are a little more nervous enter the have-a-go heros - a slightly shorter course and the marshalls were being really helpful on the downhills those guys were doing.
I did 6 laps in total:

I was pretty happy with the splits - the first being the extra climb we did at the start. They were pretty consistent and unlike normally I managed to work harder on the final lap! I had to I had Molly in my sights!

Dave got some pics of me. (Hope its ok me stealing them!) 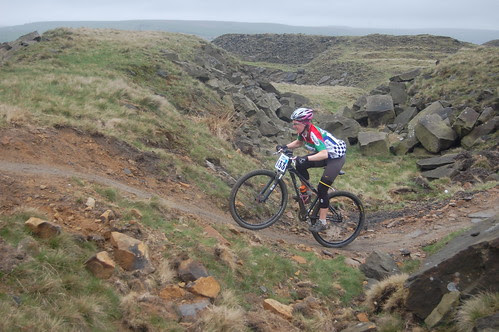 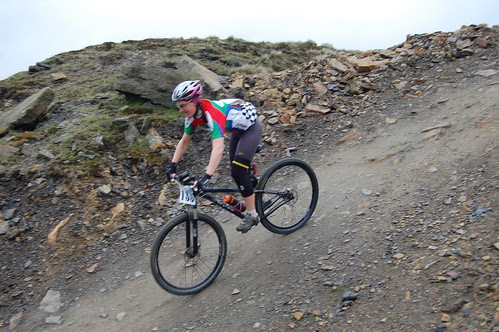 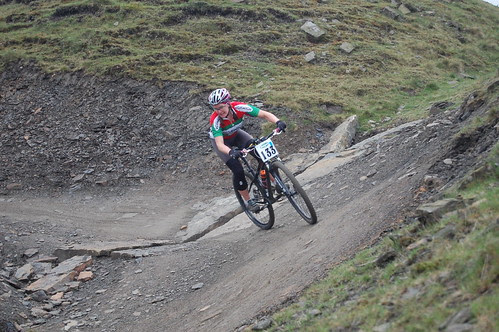