Today was the day planned to ride the mary townley loop. After a few bits of interest only fit freddie could make it. So we left mine at 7am to ride to Rochdale and get on Rooley Moor Road. This meant the biggest climb of the day was first as we were doing the loop in a clockwise direction. It was getting warm at this point so the armwarmers came off, at the top they were back on and that was the theme for the day. It depended if you were in the sun or not. 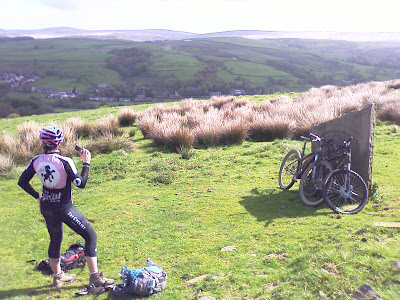 I was quite excited to reach the stone in memory of mary townley and we had our first sandwich stop here! 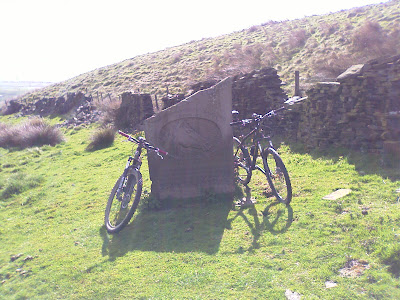 I think the bikes were ready for a rest after all that climbing! 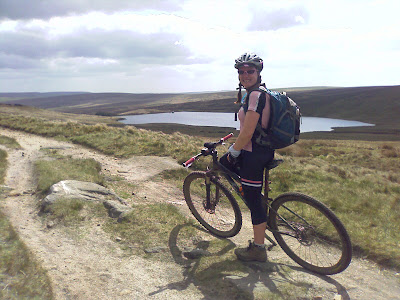 The day continued with amazing views and lots of different sets of windmills on the horizon. We stopped for a pub lunch at 40miles into the ride which meant it was over half-way! It was nice to get a big feed but it made the next hill feel hard, I'm sure there was something wrong with my bike ;o) Soon after this we met someone doing the loop the opposite way, only he was riding in our direction, somehow he had managed to turn back without realising! Still he had only climbed for maybe five minutes extra. He was hoping to get round in 7 hours, which sounds pretty fast to me. 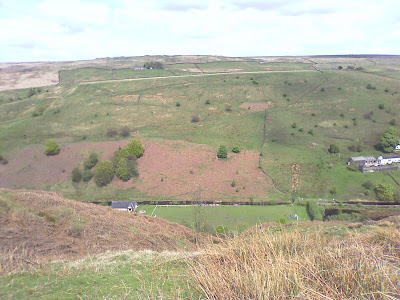 It wasn't long after this I had my first long push of the day - I had pushed one part of one climb earlier but rode the rest. This trail was switchbacks but they still were vertical. You can just see the footballers where we started the climb. After that it wasn't long before we caught a glance of the first set of windmills from the ride. Still a fair amount of climbing but actually it seemed like we suddenly found Rooley Moor Road again.
Then it was just a case of riding home and ordering pizza! I guess next time I'll have to ride it the other way. Although I think it might be harder. There were some descents I wouldn't get up as ascents.