Once again Chips was putting on a Cross race in Todmorden just after the new year. Last year I rode over with Chris but the one thing I remembered was being cold. This year I decided I would race. I still rode over and was glad I had as it was a lovely day till I dropped into Todmorden and the weather closed in a bit. Ali followed later in the car, she decided that riding there and back didn't sound fun. I was really looking forward to it as lots of friends were going to be there. I got there just in time for the junior race but it looked so muddy I didn't fancy pre-riding the course so I just chatted to folks instead. On taking layers off I discovered a hole in my shorts, another pair to sew up then it may be time for me to get some new shorts. So the 3/4 I had brought to wear on the way home went over the top. 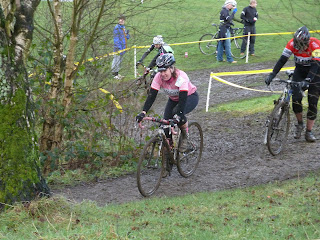 The course was very muddy, from the start I was struggling, although maybe not completely in race mode. Once we got to the cobbles I had to wait for my chance to walk up them. I was having fun jumping on and off my bike but somehow got a dismount wrong and ended up on the floor. 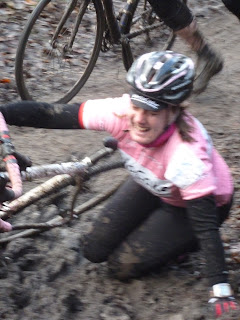 Going into the last lap the girl who had been just behind me caught and passed me, I had to put a bit of effort in then. We had a little chat and then I pushed a bit to get ahead.

Results are out and I was 7th out of 13 females, good field, and 94th out of 117 in the vets/women's race. It was also my first race of 45minutes as in the north west series we race for an hour with the seniors.

Afterwards we had a twitter meetup where Lisa fed us all, no mean feat when it was a load of hungry cyclists. I then took the lazy way home and got a lift with Ali.