Being awake before 5am is no fun but it really meant I had no excuse but to ride to Merseyside, getting the train seemed lazy even with the wind howling outside. Looking at BBC weather it kindly told me that it would be a headwind, still I was sure it would be fine. Setting out, a little later than I meant to as always, I was working hard to pedal down my road, still it was bound to drop. Then it was uphill, well until a gust blew me to a standstill. I did have a sensible thought of going and getting a train at this point but obviously I carried on. It was the right decision as although I wasn't going anywhere fast it wasn't gusting either so I was fine. Timing is everything and I arrived at Liverpool Southparkway Station just minutes before Jenn. 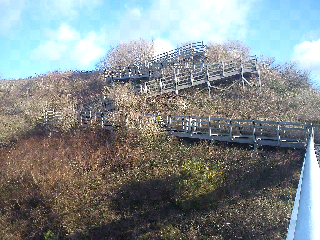 Part two of the way and the wind seemed to be dropping, the sun came out and we were on the loopline. Back down to the transpennine trail using some quiet roads and the steps to bring us up a sheer cliff. we were soon in the shadows of the Runcorn bridge finding a geocache that had alluded us last time, this time in the new location we were sucessful. All that was left was a quick ride over the bridge, it was nosiy and you could feel the bride moving. A stop at Weatherspoons for some food and then it was back to Liverpool Southparkway. 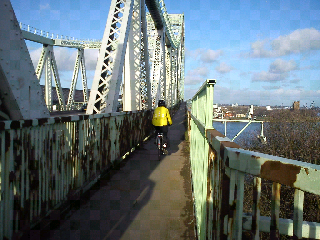 Part three and we on the underground Wirral line heading for a geocache that a coin I had needed to visit. Unfortunately it was at the top of a hill, sorry Jen. Then we couldn't find it. So next nearest was located and coin left there for someone more skilled in searching to find. A few more caches, some successful, some not as it got darker and darker we decided to call it a day and got the train back to Liverpool.
The last stage was to ride back from Irlam, as usual the moss was lovely. But this time I had both a joystick on the bars and one on my helmet making it much easier to pick a route round the huge holes. Timed it perfectly at the level crossing as a driver had just opened the gates.
Home at 9pm, tired but ready to plan another adventure.