After last Thursday I was determined to get out on the bike this weekend. At first I thought about a bivvy trip but I realised I needed a rest day, I've been riding a fair bit and the legs are tired. So last night I got the maps out and had a look. Coming across Salter Fell it looked ideal, I had never been there and it was a lovely long track. Any loop though involved a lot of road so cross bike would be the prefered bike.

Getting up in the morning I had to fix a puncture on the cross bike, I made hard work of this. First tube I put in had a faulty valve, next one exploded (don't think I had got the tyre to seat correctly). Eventually that and new brake pads were done so I could leave. I decided to ride to Clitheroe as it was such a nice day but at Blackburn I was debating heading home, I was finding it hard the roads looked like they would ice later, but these were all just excuses so I continued, planning to get the train home from Clitheroe later. Once I was past Clitheroe everything changed, I think I forget how amazing and how quiet the Forest of Bowland is. I'm so lucky as I can ride there from home. 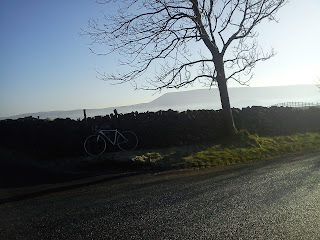 Now I was having fun and on the route I had plotted. First bit off off-road involved me carrying the bike, so it definitely counted as an adventure. The roads had on the whole been fine, the odd little bit of ice at the very edge but nothing too bad, I was taking it easy descending to be on the safe side. After Gisburn Forest the roads changed a bit. Now descending was at walking pace and I was off and walking some huge stretches of ice. I was also aware that time was ticking and it still gets dark early. Stopping on a very icy bridge I ate a sandwich and made a decision, back to Clitheroe it was. I could have carried on and if the rest was rideable I should have been back to Slaidburn as it got dark, but then I had to get to at least Clitheroe to get the train. By then I could expect more ice and it to be a lot more difficult to pick it out. 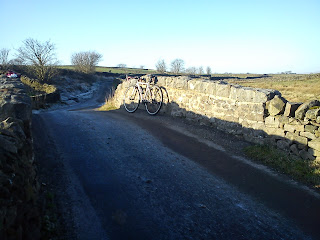 I got my garmin to navigate me back and on the outskirts of Clitheroe decided just to ride home. The roads here were fine and I was going to be on relatively major roads so they were gritted. I timed it perfectly getting to Ewood Park just as all the football fans left. My usally squeaky cross brakes were worse than usual on the frozen rims though and worked very effectively to clear me a way through.