After me being very grumpy all week due to thinking I was going to be missing out on all the fun I decided to go down to wales with Ali and ridearound on the roads and meet the others in the pub for an evening meal and bivvying. Fortunately Ali had arranged to ride this year with a couple of our friends so I didn't have to worry about her being on the hills on her own. All this meant that I was route planning and packing for two on Friday night. Ali was busy laminating maps for her bars and getting her food ready, I had very little food since I could stop at shops and Ali had only really shopped for her seeing as I was meant to be staying at home.

Saturday morning and it was raining at home, one of the bike racks broke but we still got to Forest Freeride with time for faffing before the bike weigh-in and raffle. Neither of us had anywhere near the lightest setup but we were half the weight of the heaviest, an impressive 129lbs! Time came to leave and everyone set off, except us as there was still no sign of Andy and Jane, we knew they were on their way but with no mobile receoption we had no idea where they were. Turns out they were stuck in the famous Newtown traffic jam. But once they arrived it wasn't long before we were on our way, the first section being road so I was joining them.

A nice uphill road took us to the first off-road section, it was only short so I decided to give it a go and at least bag the first checkpoint. It was an out and back, for our chosen route, and the first section was a nice wide track. We all took the sensible option of walking the last bit to the checkpoint, fully loaded and on day one it wasn't worth it. There we met some other riders enjoying the view. 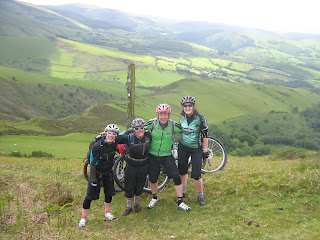 After a lot of chat, not by me for a change! We headed back up the hill, I was glad of footwear suitable for walking in and wishing I had done more running as my calves were complaining. 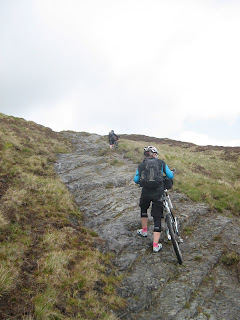 Back to the road and my route took me left round the roads, oddly I turned right with the others, well the thumb seemed fine with my not holding on or braking method so I thought I'd try some more off-road and it was fun!

It turned out to be a lovely rideable track with lovely views (Ali liked being able to see the windfarm). We met some more WRT people at the top of the hill, they had just pushed up a huge grassy slog, at this point Ali got loads of bonus points for her route (unlike the last checkpoint where everyone else headed down a lovely looking descent and we climbed back up the hill). Down to a gate and another checkpoint where we met some more people, it was certainly busier this year! 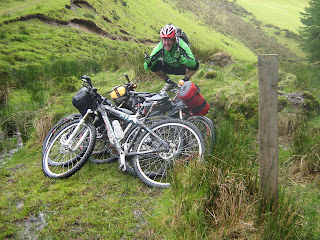 We headed into the forest for the first time before climbing out up onto a mountain again (or near enough they were tall!) 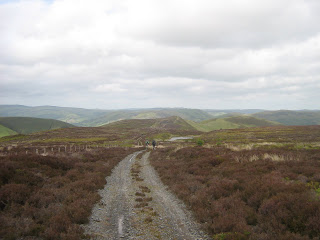 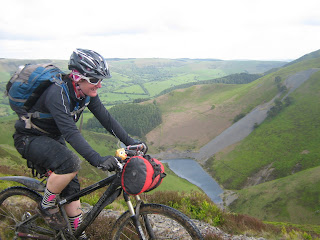 Back down onto a road for some easy tarmac miles into Abercegir and onto Glyndwr's Way over to the next checkpoint. 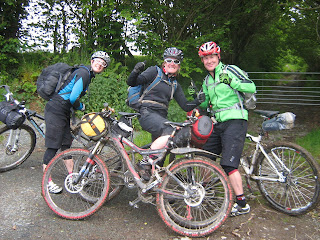 Down what turned out to be the White Road, an ice-rink may have been a better description, Andy tried to ride it but just slid off at my feet! We started to realise we were not going to get to the planned pub in time and after passing a huge wedding do in a field Ali was getting tired. So a quick look at the map and we realised that the next village had a pub marked so that was our aim. Stopping at Cenmaes we bumped into more riders and had a very average but welcome meal. Back out and the aim was to find somewhere to bivvy, only everywhere was hilly. It was getting dark as we snapped our last checkpoint of the day. 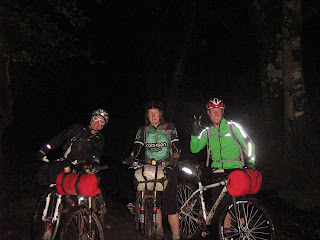 The only flat area (that wasn't a bog) was the bridleway and it was nice and grassy. So we set up camp there. As the rain started I was a little jealous of Jane and Andy's tarp but I was soon hidden away in my bivvy bag and fast asleep.