Since I got no work on sunday this week and nothing was planned Ali and I decided we should do something exciting. A while ago I had planned a route to and from Gisburn Forest to use as a bivvy adventure. I mentioned it, suggesting that maybe Ali could meet me in Waddington after getting the train to Clitheroe.... she suggested doing the whole ride out! Friday wasn't looking hopeful as the rain bounced down so the wet-weather plan of trying the ride but getting the train home was planned. I spent the rest of friday evening packing and putting my brake on Ali's bike...must get that sorted!!!! A start time of 10am was agreed and it was off to bed, a lot later than I meant to go. 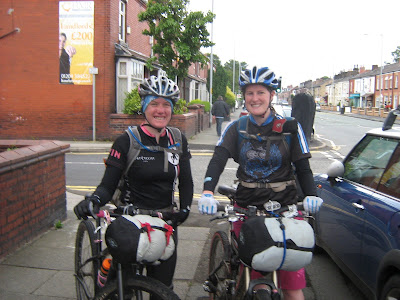 In the morning we were all packed up ready to go and thankfully it didn't start raining till we were a couple of miles from home. The pattern continued all day with showers! The first section out along the witton weaver way was well known and then after tockholes there was a little carrying over stiles to get us the other side of Blackburn. Not long after Plessington we came across a closed bridleway which led to a road diversion involving a busy A road, not as much fun!

Crossing the ribble for me made it a real adventure, it felt like we had gone a long way, even on a road bike that isn't close! After this we followed the ribble way for a while, some kind person had marked the bridleway with regularly spaced arrows. Carrying rigger across the bridge was interesting, but Ali's method was even funnier! 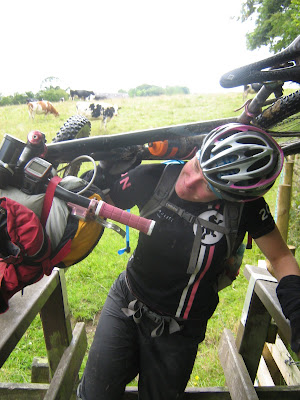 Soon pendle hill was becomming clearer and we passed through Waddington, deciding not to stop at the cyclists cafe as Ali had been struggling and I thought the best idea was to get to the pub (The Dog and Partridge at Tosside - recommended!) as I was worried once she sat down that would be it! 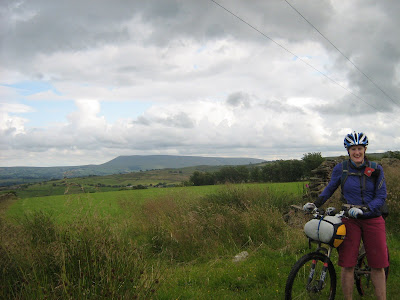 After Waddington she seemed to find a second wind and we enjoyed the ride to the pub. Arriving there at about 6:30pm we were quick to order beers and some food. We enjoyed ourselves in the pub till it started to get dark, by which point I was fed of kicking Ali to wake her up! Into the forest and Ali decided the trees looked scary and she didn't want to sleep near them. A section of the new stuff - Ali hated the berms - we found a spot near where I stayed with Jon. Got our stuff down and basically fell asleep! 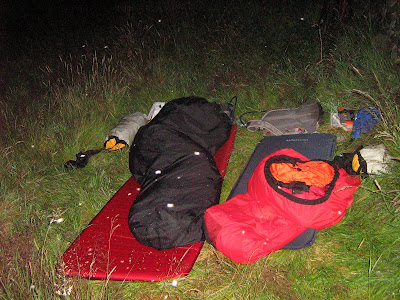 I didn't sleep as well as on other bivvy trips and the midges came out to play early! We started riding at 5:15am! We stopped at the carpark for ali to have her breakfast - I had eaten mine the minute I woke up but once Ali was up she wanted to get away from the mean, nasty midges!
Ali was finding it hard at first and was planning on getting the train, the plan all along! The only question was would I be nice enough to get the train with her - I really wanted to do the ride!!! At Chatburn, with no idea of train times Ali decided she wanted to try and get up Nick o Pendle, leaving me as I had to have a rest halfway up! 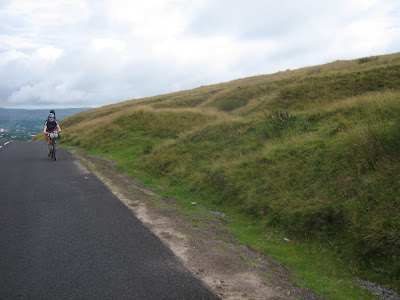 At the top she was heard to say "is that it?" Some people are annoying with there natural athletic abilities! She also made the decision that she wanted to ride the rest of the way home!!!
It was only really my second ride fully rigid and one technical section ali said she felt sorry for me having to ride without suspension, I was enjoying it actually! 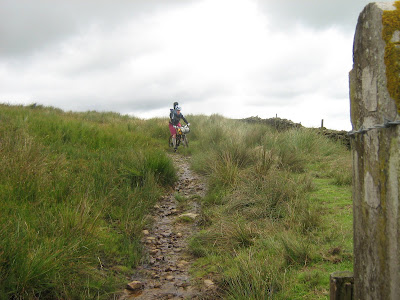 We stopped near Padiham at a petrol station for supplies - sandwiches, donuts, crisps, jelly babies, water (the essentials) - and had a second breakfast. Before the next off-road section, we climbed a steep bridleway only to end up where the lorries are in the picture below. 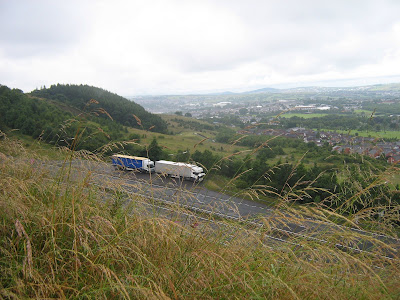 We wanted to be up the hill the picture is taken from, my suggestion of running across the A road (which is basically a motorway) and scrambling up the banking was vetoed and we went back to find another way. A nice horserider told us how to get there so we were soon on our way. 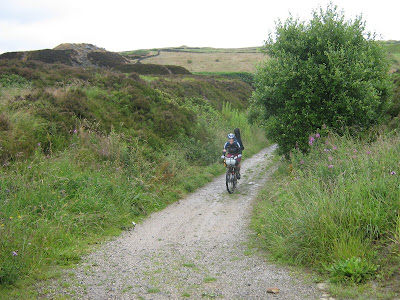 After that it was haslington, helmford, ramsbottom and home. The decision was made in Ramsbottom to come back on the road.
Back home, bikes washed, kit dumped on kitchen floor. We are both tired but happy! Early night tonight I think!
Day 1: 47.27 miles
Day 2: 42.67 miles
Still annoying that Ali can do a ride like this with no training! But she points out she was really happy to have a granny ring!