TeaCake had come up with a crazy plan to ride the pennine bridleway, bivvy and ride back. Redbike booked the time off work but I was meant to be working the friday - trip was thurs/fri. So I came up with my own plan: 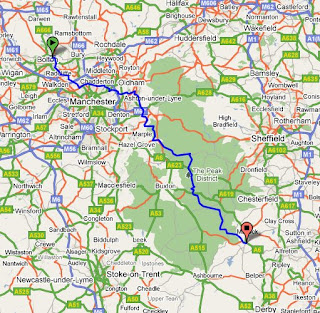 I would ride out to where they were meeting on wednesday and then ride part of the way with them on thursday before heading home via a train station. A bit of time was spent with maps and playing on bikehike and the route was planned - all 73miles of it. Redbike decided that he would ride over from leek and meet me there to save having to drive to cromford on the thursday morning. I told Ali not to worry I would be home before her on thurs to help her pack as I had to drop her off at the airport early friday morning.

So on wednesday I left at 9am and headed off, the first part towards manchester and round the outskirts was easy enough and the sun was shining. Soon I was on the killer climbs at the edge of the peaks. Around this point I realised how easy it was to get my maps on my sleeping bag so I could easily read it. Although I had my garmin I like to know where I am on a map! 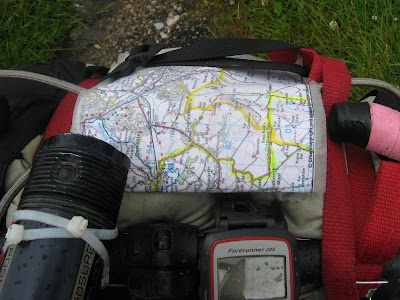 I so enjoyed this setup that I will be making sure I always print out maps so they fit like this, I had the route on 5 double sided A5 maps so I was counting down as I switched maps.

The ride out was hard but fun. By the time I got to Hayfield I was wondering if I was going to make the pub in Cromford before they stopped serving food! About 7pm my phone rang with Jon asking where I was...he had said he was leaving home for the 25mile road ride from leek at 6:30pm - I know he is always early but..... My answer was miles away! As it turns out after being passed by fell runners on a hill it was downhill all the way and I got to Cromford at 8:10pm, in time for lots of food and a couple of drinks. 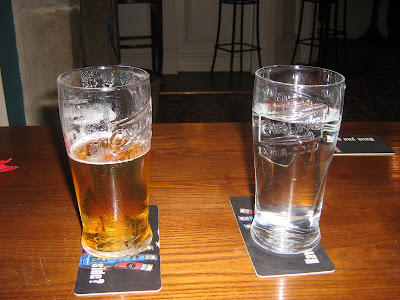 Jon kept getting dressed to leave but I insisted on finishing my drink, we then went the wrong way by miles and managed to eventually get to the visitors centre at Middleton Top after 8miles, most of which felt like they were uphill. Once I managed to get Jon to stop disappearing off up the pennine bridleway - he obviously wanted a head start! We pushed our bikes up the hill and found our spot for the night, it was just gone midnight!
I didn't sleep well but was quite pleased by the lack of midges in the morning. I like Jon's tent, although might have been more impressed if it had been put up a bit better ;-) 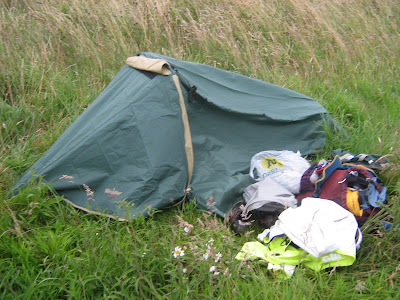 After breakfast we headed back to the visitor centre where Kate rode in, she managed not to get lost coming from Cromford! 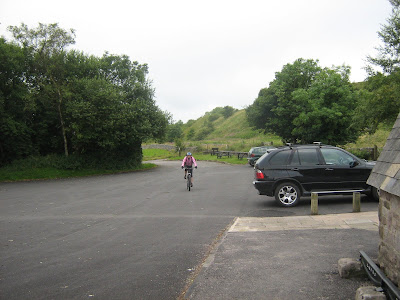 So it was time to head off, I was shattered and glad I was only riding home - not sure I clicked that it was going to be 65miles at this point! The women at the visitor centre looked at us as if we were crazy when we explained the plan, she explained to us it wasn't all a nice disused railway line and the other week a couple of lads had taken 10days, they had planned 9 but it took longer!
Not long into the ride the kate's bottom bracket seized completely, some force applied and it was moving but it soon did it again. My suggestion of pedalling backwards every so now and again worked and we got to the cycle hire place at Parsley Hay. They were fantastic, took the bottom bracket out, cleaned it, put it in and it seemed fixed! It lasted the rest of the ride so what can you say. When Kate tried to pay them they told her to put a couple of quid in the charity box. Definetly buy something from the shop if you are passing!
After that it was Jon's turn for a mechanical! He had singlespeeded his bike and the chain kept coming off the tensioner. Kate helped, by hovering, knocking the bike over and making helpful comments. But that seemed to work! 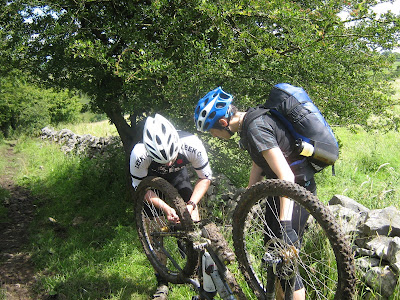 My tired legs meant I was being dropped on all the hills! So it was nice to come round a corner and see the two of them walking, gave me an excuse for a rest as well! 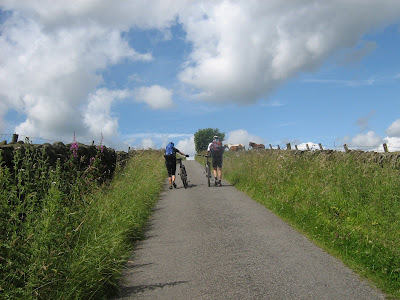 My favorite comment of the day was Kate saying can we have a "faff stop" Jon heard "fag stop".
Descending down Roych clough was fun after pushing up it the day before. I think I made my best eveer attempt at it as well, only walking one drop - still think it is huge! Then it was into hayfield for a much deserved burger and chips! 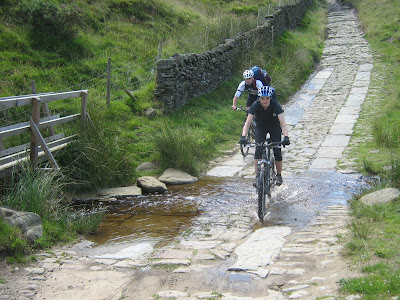 I had two options at this point, go to New Mills or continue on to Glossop, I chose the latter ignoring the fact it was gone 3pm and I had said I would be home for 5! 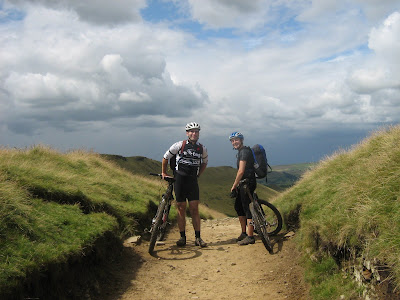 That took ages, although it was lots of fun! We split company just on the outskirts of Glossop and I headed towards Ashton. Here I rang Ali to grovel, she kindly said I could ride home!
From here it was past the B of the Bang 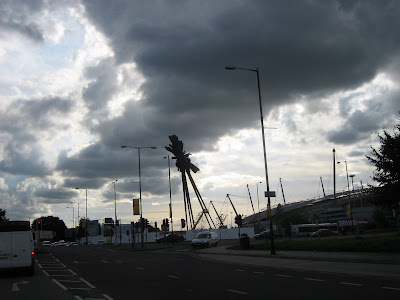 Then home, somewhere my garmin died!
145miles over two days, I'm shattered my legs are very tired but it was so much fun!
All the rest of the pictures are here.