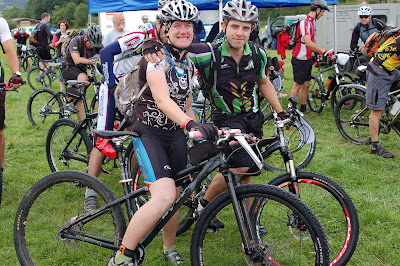 Day 1 was billed as 80km but my Garmin recorded 86km, other reports say 90km, but it was a good day in the saddle. My hands finished buzzing so I'm not sure a whole week of fully rigid is going to be a good plan. But I'm happy with how I am riding downhill! Most of the day was spent riding with Phil another singlespeeder. On the hills we would catch people up - or walk at the speed they were riding. Then when the road went down they spun away on us. We had 7 hours to complete the stage and I was comfortably within that. But I couldn't chance going a lot slower.

I saw Ali loads today as she chased me round which was exciting! back at camp and I couldn't find my cradle for charding my Garmin, plan at the moment is to use Ali's - which ruins her riding plans. Fingers crossed it turns up! 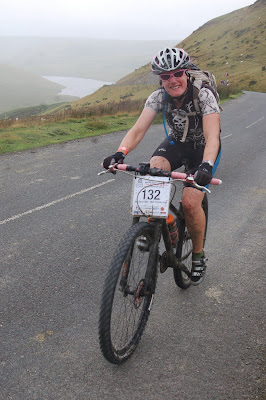 Yesterday Ali headed out on one of the rides I had plotted with one of the other support crews. They had a bit of a trio adventure, with stampeding cows, overgrown trails and vertical slopes to drag the bike up! Oh and in the end a friendly farmer to explain a better route than the one I had plotted!

We set off again at 9am to do 85km with a 11km linking stage in the middle. They told us some of the the climbing had been cut out of it. The day started with a 16km road section, where after we all turned round due to heading out of the town the wrong way, I ended up in the lead group for about 5 minutes. At which point the road went downhill and everyone pedalled off on me. The day was good with most of the climbing rideable and some great descents. It was fun riding down a descent fully rigid when others walked. It felt hard today and there was a lot of climbing before we reached the start of the special stage.

Soon I was on the start line with a promise of only 1km of climbing. After 10m the thought of riding fast uphill stopped and it was down to survival! There was definitely a lot more climbing than they had said! I was dreading Climach after a really bad ride last year. This time apart from twice when people stopped in front of me I rode all the descent and it was just one climb I had to push up (the guy with gears in front walked it as well). I was pleased with how I rode it but no idea how the time will compare (we have the Italian ladies marathon champion here!)

I got back to the Marie Celeste - car wide open, stuff all over the place, no Ali. Turns out she was chatting!!!

That evening while I had a hot shower, Ali cleaned my chain link by link, it might even be cleaner than when it was new!

During the day Ali spent her time looking for a new tent pole after one of ours snapped during the night. She found the most helpful shop in the world (Llani Leisure). They couldn't find the right pole, despite ringing practically the whole of wales and taking out all the poles in the shop. She then helped ali come up with an ingenious soloution. 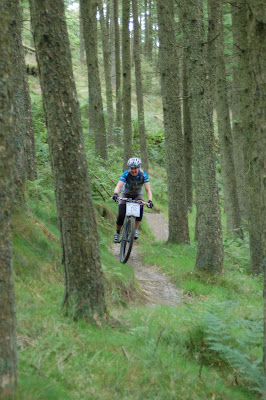 After the pub last night I couldn't get to sleep. My knees were sore and I slept really badly. On waking I unlocked the car and struggled to get to it, the car locked itself just as I got there. I nearly collasped in pain and lay on the floor for a while before unlocking the car and getting onto the drivers seat. This is where Ali found me and was ver concerned about how I looked. I really thought my race was over!! Some painkillers and strapping and I was alble to walk. The plan was to try and get to the first water stop being careful and walking most of the climbs. I got there feeling not too bad. I was sure I was further back in the field than the previous two days. I had loved the trail we had been on - we even crossed the river of doom from last year, only this year it was gently lapping around my shins not up to my chest.

Then was the special stage. I had planned to take it easy but that went out of the window and I went as hard as I could, it was slow though compared to other times. But I was just happy that I had completed it! 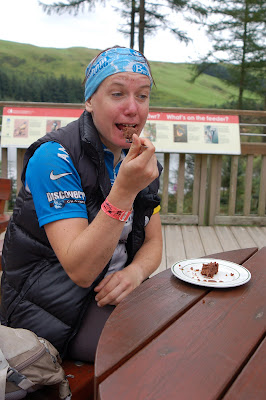 On my way to the lunch stop I passed Ali talking pictures so stopped at the cafe and she bought me chocolate cake while I enjoyed my sandwiches. Then it was on my way. Lots of plodding and lots of pushing up hills. After one of the hills I met Ali who had rode over to meet me. We headed back to the last drinks stop before she drove to make camp and I walked/rode the last section.

I made cut-off by 30minutes which was pleasing seeing as I had had such a bad start to the day. We were in a tiny campsight on a slope, but I got my first good nights sleep. 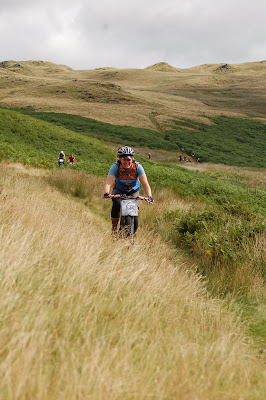 Today was amazing riding. It felt like constant amazing views and fantastic descents. It was either singletrack or rocky downs. We also did the seven river splashes from last year. Less scary when the water level isn't as high. I was feeling good all day and I arrived at the lunch stop buzzing!

Night stage was hard. My 30 second guy (Phil) caught me very quickly, I just had nothing in the legs on the uphill. I even had to walk a couple of bits and near the top my bike made an almighty noise. Which I had no idea what was, but sounded like the rear brake. Stopping and rotating the wheel backwards seemed to sort it. Then it was downhill, I was riding poorly to be honest, but some shouting at myself to look where I was going seemed to help. 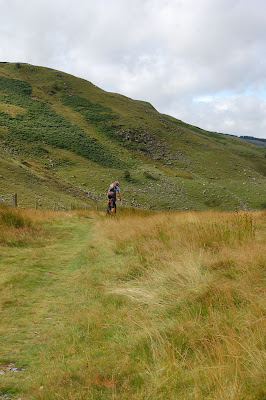 We woke up to rain and wind. Lying in the tent it sounded so loud! Getting up it wasn't as bad as it had sounded. But I was still in full waterproofs. We climbed up fireroads, some walking was required but it was mainly riding. Then we hit some muddy singletrack. Lots of screaming from me as I slid my way down but I was impressed to nearly ride it all which is a big improvement. It was a long way to the first water stop and I ate half my lunch there. This turned out to be a good plan as after loads of the Brechfa red and black trails - which had me wondering if rigid was a good idea - we arrived at the start of the special stage. Ollie and I arrived at about the same time but I went and rode it straight away (after a bit of chatting) whereas he had lunch. Which meant he had to queue for a while before riding the stage. My legs felt fine but lacked power on the steeper stuff. so today I decided instead of blowing up after 500m like last night I would just ride. One or two bits were a struggle to get over but there was only one push and some downhill was done without braking.

The other thing today is I realised what Jenn meant about a hand position for downhills when I don't need to brake. That was where I was on the fireroad downhills today!

I left with the army guys but lost them on an uphill section when I walked. I was back just within the cutoff but I think it will be extended as the special stage was closed for a while.

Today was the end of the special stages, with only two more linking stages to go. 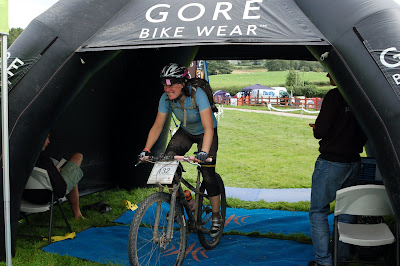 Woke up to rain again in the morning. But by the time we were riding it had stopped. We started on the road where people came past me with ease but once the climbing started I felt strong. We seemed more strung out today so it was easier to stay on the bike, yesterday I was stuck behind traffic that was just a bit too slow. We did a lovely bit of trail that could have been very boggy. Before lunch there were two climbs I walked. But after lunch the two big climbs were a nice gradient to climb. One of them was a climb from last year that I found really hard geared! We did one of my singing descents from last year and I cleaned it. Last year there was carnage and medics waiting at the bottom. The stage turned out 5km shorter than advertised so I was back with over an hour to spare.

Got back to the Marie Celeste again but this time eventually found someone who explained Ali had gone riding. Later on I find out she had got herself lost on the forest fireroads and had ended up following the signs for tomorrow and having another trio adventure without me! 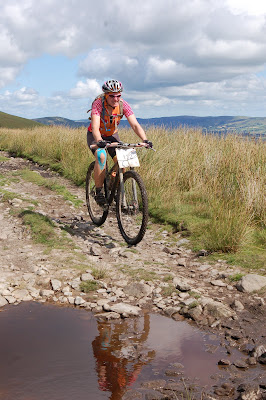 The last day and I couldn't believe it! We set out and my legs felt strong. We did some of the trails Ali had rode yesterday and she was waiting at the first water stop. After that my legs felt good on the hills and we went across some moorland which really strung the field out. After a nice descent it was some cycle path which was slow going as it was so busy - I had forgotten it was saturday - before lunch, where Ali was waiting with cake. Here they had some girls to put squirt tattoos on, I was confused they weren't lubing my chain, turns out hire-a-blondes don't do that! After lunch apart from one climb and descent where Ali was waiting again which felt a bit like cut-gate-lite it was all road and before I knew it I was back, disappointed to finish and wanting more. How could it be the end?

We went into town for food and then stayed for the prize giving. I got a special prize for riding the whole event on a rigid-singlespeed. Just as we were leaving the squirt guys gave me a spot prize of a bottle filled with Jelly Babies, I was excited everyday I saw them handing them out!