I woke up yesterday feeling terrible, I had spent the night burning up and just wasn't right. First thought was I would do the race on gears instead of the singlespeed but after struggling through breakfast I knew racing was out of the question. Lots of paracetamol later - very unusual for me - I headed up to watch. I had talked my friend Odile into riding so wanted to see how she got on. She hasn't been riding long but has survived a couple of trio adventures. The day was so hot and I found the walk up to the quarry hard! But it was fun to watch the racing - some of the trails looked a lot scarier than when I was riding them! 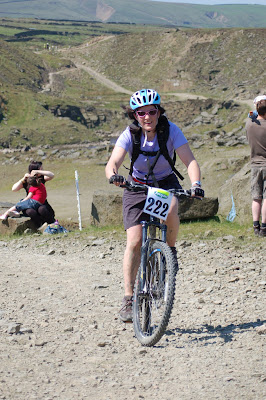 Odile finished 1st female in the 'Have a go hero' womens category and picked up a spot prize as well. 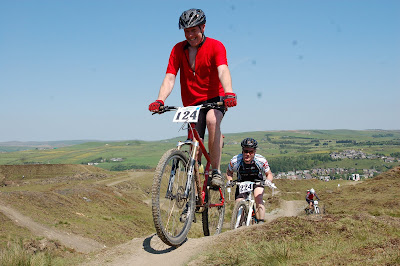 Three singlespeeders turned out today, here Mr Sparkle (who finished 2nd) leads trev up one of the climbs!
That's the end of series one, but series two is on the way in August. Definetly recommended!