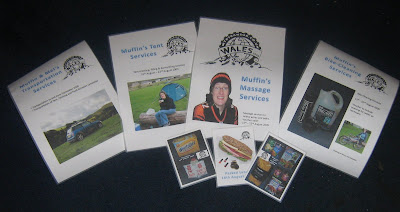 Today I turn officially old according to Ali! I got up to an exciting box to open. Seeing as we weren't meant to be doing presents this year it was very exciting! I was made to wait to open that box and open other presents, Jon had got me some cool stuff! (A wired keyboard, we have a silly wireless one that stops working when it feels like it! A DVD about Lance and the all important bottle of wine). Then I started on Ali's box, inside there were lots of little parcels I had to open them in a certain order and the first one was an entry form for transwales!!! To say I was suprised was an understatement, it had been agreed if we could afford it Ali would do it and I would do support! We have even been planning her training (well I have!) The remaining parcels were the all important, Ali washing my bike, Ali putting the tent up, Ali and mel transporting my stuff, Ali cooking me food. I am so lucky and so excited! Only one question left, do I do it singlespeed?