The long version of 24 hours of Exposure

The build up was a little less stressful as on Thursday night I had the task of packing my bike clothes and bike stuff and Ali took charge of everything else. In fact she sent me to bed and then proceeded to remove the rear seats from the car so we could fit all the kit in. Then on Friday morning she packed everything, only needing me to help get the Gazebo that Cookson Cycles had kindly lent us up on the roof. 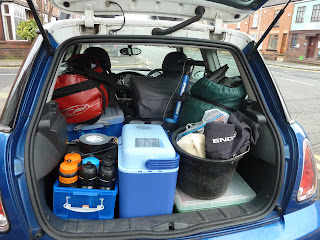 A quick stop at the supermarket turned into a bit of a longer stop as it was packed (how I hate them) and then had no doughnuts so we had to try another supermarket! After that it was a little stop/start up the M61 due to traffic but once on the M6 pretty clear. We got to the venue at 2pm and set up opposite the JMC it guys. Tom was camped just a little bit down the track. All that was left to do then was faff and panic. Although I think that there was now nothing that could be done calmed me down a bit. I mainly just chatted to people, some things don't change. Greg and Pauline and got their huge tent set up near us and then it was time to sign on and get our pasta party vouchers. The pasta party was a little disappointing with nowhere near enough food so Ali then cooked chilli. After that it was time for bed. For me I slept well, woke up a fair few times but always got back to sleep.

Morning came and it went quick enough, Ali got set up and I got bikes ready, putting a front mudguard on the Superfly (which I was glad of throughout the race), race numbers on both bikes and a charger for the Garmin so I could use my 800 for the whole race, geek me? A while was spent trying to decide what to wear, all my previous 24hour races were warmer and I started in shorts! In no time at all I was riding down to Newcastleton with Ali and chatting to people I hadn't seen since last year. They called up the top three in each category to sign-on and line up at the front and excitingly that included me. 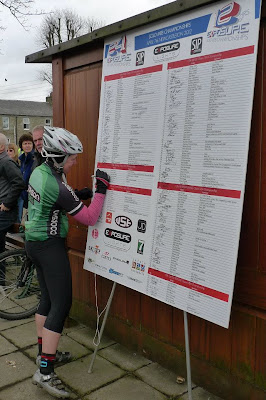 The start was a friendly slow affair, where being able to track stand was useful! Once the van swung off at the front the pace went up but I kept my plodding. I could see three other female 24hour racers round me and they looked very very strong. We hit the muddy singletrack through the trees and there had been some work done on it over the winter. It is very hard to ride when in a queue but surprisingly I only dabbed a few times, my ability to ride very slowly was useful here! As we got onto the fireroad two of the girls rode off, my heart rate was already high so I didn't follow, its a long race and no point killing myself on the first lap. Just before the first bit of singletrack I nipped past the girl from Portugal, who was looking strong. I love the singletrack at Newcastleton and have ridden it a fair few times now, I was hoping this would give me an advantage, but no I could hear her on my wheel the whole way down. Only once we started climbing on fireroad again I realised it was someone else on my wheel. We were similar pace climbing and so chatted for a while but he was faster through the next bit of singletrack. The first lap continued the same and I came into the Pits in 3rd place with a smile on my face.

The next two laps continued the same, I was putting some time into 4th but losing time on 1st and 2nd. I was managing to drink well, I've never had to stop so many times to go to the toilet in a race before, and eating steadily. I was beginning to feel I was in all day pace although my back and knee were already hurting - I think from all the climbing. At some point I had a gel that made me feel sick, making it harder to eat. But I went onto savoury which seemed to work. As it got dark I turned on my lights and flew through the singletrack. This is turns out was the one lap that I made time up on the two girls in front of me. I continued through the night slowing slightly but enjoying the riding and Ali was there everytime I came into the pits.

In the morning I died, I found myself riding off the side of the fireroad and closing my eyes on the singletrack. The girl who had been in 2nd came past me (I had gone past her at some point in the night) and she looked very strong and the girl in 4th came past me, turns out she was unlapping herself. I started having to walk just so I didn't fall asleep and I was close to tears. As soon as I got to the Pits the tears came and I told Ali I was off to bed I couldn't stay awake. She sat me down, fed me a bacon roll and lots of shot bloks while telling me I had to keep going I was in 3rd. Eventually she put me on my bike and running the first bit with me sent me out. I wasn't happy telling her she was mean but plodded my way round. 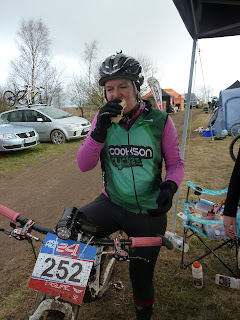 Next time in there was loads of people in my pits ready to bully me. I was slow and tired but knew that I only had time for one more lap at the pace I was going, there was no way I was going to speed up. The girls ahead of me were super strong and pulling away but as long as I kept plodding it was unlikely the girl in 4th could catch me. Out I went and had quite an enjoyable lap, if still slow and sore. 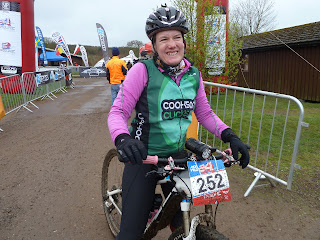 Finishing I got an Easter Egg and the news I was definitely third, that was my if everything goes amazingly and I am lucky goal so I was happy. The nice thing about having to finish before 12noon is I had time to have a shower and then cheer friends in, not go out for another lap and be one of the last to finish.

The podium presentation was fantastic and thanks to Exposure Lights for the fantastic prize.

In the evening the wind and the rain came and we decamped to the pub for food. I slept better than I've ever slept after a race, I think maybe for the first time every I wasn't too dehydrated.

Big thanks to Ali it really wasn't a solo effort but a team effort, she even packed everything in the car on monday while I sat and read. I think I had the easy job, I just had to ride!

The bike was perfect, I rode the whole race on it so thanks to Cookson Cycles for getting it ready and everything else.

Also thanks to everyone there, those I was camped with, those in the pub later, everyone in the Arena it was lovely been cheered round every lap and of course the Marshalls who were there all night.

Problem is I want to do another one, I blew up completely in the morning and wasn't ready for a hilly course almost makes me want to do some specific training!