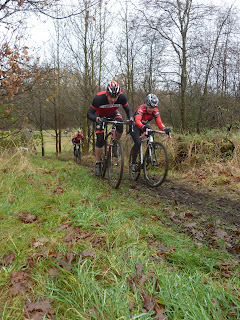 Today there was a Madison Cross event at Clayton Vale. I wasn't sure what it involved but had planned to race with a friend. I then cancelled as I was meant to be working, this was then cancelled. I didn't set an alarm since I had a late night on my work Christmas Do and decided to see what I felt like when I woke up. Waking up at 9am I fancied the race but it was a bit late to get the bike ready and ride so I drove down. Getting there I signed up and on the start line had to find my matching number.

Soon we started, the course was short and laps were all less than five minutes. It was also very muddy and a little cold. The hail storm in the middle added a bit of interest.

After an hour both me and Phil, the guy I was paired with, had done 7 laps each which meant we won the 'First team with a female rider' prize.

Afterwards there was soup for all the riders at the velodrome cafe. Then Ali and I went and had a look at the BMX track, maybe something to have a go at.

Some riders got into the festive spirit, maybe I should start planning for next year? 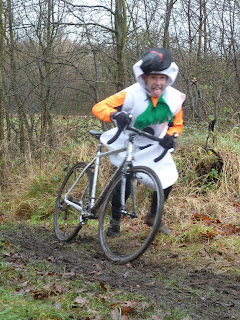 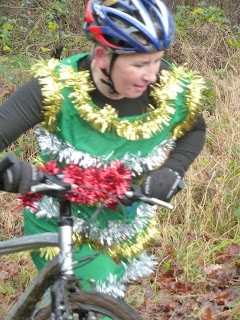