73miles, 5miles to the cut-off, 30minutes. No slacking. Push up the first hill then power power. No granny ring, stand up, use those singlespeed legs. Downhill big ring and pedal. 78miles, rushed across, last one to make the cut-off.

Coming into this race* I wasn't feeling great. I was probably over raced and under-rested, I was stressed because of changes at work, good changes, and I had been away from home. All this meant I had been really anxious recently. Ali was also riding and determined to finish. she had trained well and was looking good for the finish. I got out of work early so we were able to get on the road nice and early. Thanks to the Chadwicks we had a pod on the campsite so there was no pitching a tent just throw everything in.

The morning of the race came and it was raining steadly, up to the start and I started quite close to the back. I was with Ali all the way through the neutral section but she told me to go once we turned off forest drive, I did push on a bit but everyone seemed to be coming past me and my average speed was well down. I thought it was just my legs. As with last year I rode through the first water stop and feed stop and got my bag at 50miles, I was hungry and there a lot later than expected. By this point the mud and rain were turning it into an epic and I was thinking about bailing. Still everyone was saying how hard it was so I carried on, turning left towards Newcastleton when I knew I could just drop down the singletrack to Kielder Castle.

Over Bloody Bush road and the conditions seemed to get worse, I minced across the boardwalk and then ploughed on through a headwind. As I dropped down my barely functioning brakes stopped functioning. I was so scared descending, I nearly walked but instead kept diving into braken. Coming to the food stop and I could see our car, that meant Ali hadn't made it. Turns out she had issues with the gears (she thinks she bent her rear mech) and had to bail at 30miles. In some ways I was glad as it was really horrible riding conditions. It also meant she changed my front brake pads while I stuffed my face! Leaving Newcastleton I had half an hour on the cut-off. 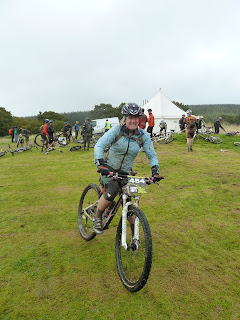 I enjoyed the Newcastleton trails and I was soon on the long fireroad back to the border, crossing the border the sign said five miles to the checkpoint, I had half an hour. That is when I had to sprint, not something I ever want to do again. When she told me I had made it and to quickly cross I was in shock and confused. A guy handed me my bag and I was on my way. As my aim was finishing I was just riding then, but seemed to be passing a few people. I was still riding up the hills and luckily my front brake still worked so unlike many I could ride downhill. I finished in just under 13hours, my longest kielder yet. 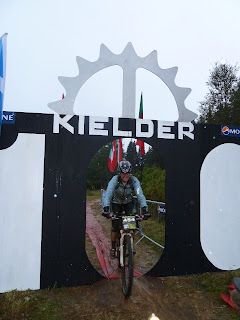 I was 4th female and 146th overall. Only 177 finshed out of the 650ish that startered (about 200 never even made it to registration). Although I was dissappointed with my time and since I finished feeling strong probably could have been faster, I was pleased just to finish. It was an epic day!

*for me this year was survival I certainly wasn't racing!