When this event was first announced I planned to enter but then it was only two weeks after SITS and Ali was away with the car. I still wanted to go though and when Andrew from work offered me a lift it seemed like I had to go. So on Friday I met him and Becks in Bolton and we headed down. Getting there in time for the pasta party (we got loads) before curling up in my tent. As always I slept really badly and then was woken up early by the guy who had parked next to my tent driving off at 7am. I got up ate my breakfast and got everything ready. I knew I had to be prepared as I had no Alison to look after me.

It wasn't long before race briefing and it was slightly hard to hear due to there being no PA, some regulation or something. But I gathered that we had a long section for transistion where we had to walk our bikes. Wayne had kindly given me space on the JMC table so I had all my bottles out. I joined the boys near the front but was happy that the start was on the bike. 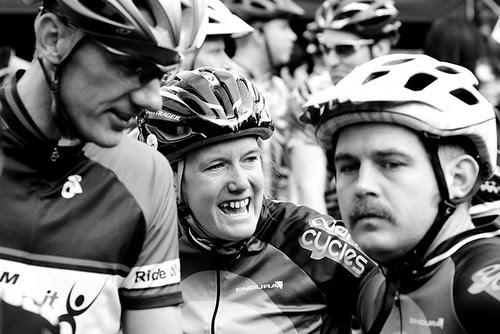 It wasn't long till we were off and there was pushing and shoving where I got a bar end in my leg, its now a huge bruise! But they sent us up a fire road climb which spread the riders out. I spotted an Isle on Man rider go past me and I was sure she was in the same category. But it was too early to worry and she was flying. First lap of the course and I loved it! Wayne was amazing and was stood there to hand me my bottle and gel, so no time lost. Out on the second lap and entering my favourite bit of the course, the black downhill section, and I caught the Isle on Man girl. She caught me again on the uphill and I tried to keep up but she was amazing. I had realised she was definitely solo now so I tried to keep her in sight but it wasn't happening and then I punctured. Thinking I was only half a mile from the end of the lap I opted to run. Turns out the first lap was slightly shorter and I ran a mile. Wayne then was a star, fixing the puncture and getting me on my way. Unfortunately two solo girls passed me when stationary. Heading back out I worked hard and got those two on the first half of the lap but I was sure the speedy climber was well gone! 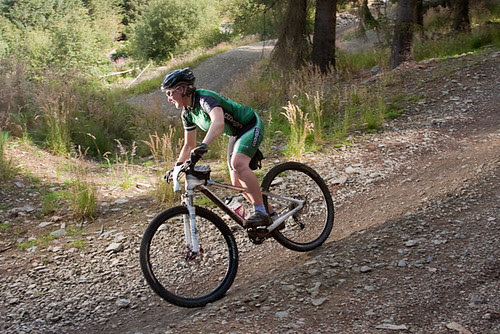 A couple of laps later on the black descent I caught her again. This time I let her go on the climb, I was impressed to find out she was meant to be riding pairs but was her partner was injured. But she was obviously struggling and I was having fun. But I knew if I tried to hold her on the climb I would die. Coming back to transition and she was there downing a gel, I grabbed a bottle off Becks (thanks to her and Liz taking over Pit duties) I headed out first but it wasn't long before I was caught on the climb. This climb wasn't as steep though and I managed to push on a bit but she was always there. After the climb we turned into a muddy section through the trees, I couldn't see her when I came out and it turns out I rode the steep muddy chute and she walked. Only one thing for it push on. I kept expecting her to catch me on the climbs and so didn't stop at transition pushing the whole time.

Next time through I knew it was last lap, I was still loving the course so grabbed a bottle and headed out, hoping that my speed on the downs was enough. I was still loving it and was told by a couple of people I should have stopped smiling by then, but how could I on such a fun course?

After finishing I was obviously tired as I went to change and forgot to take my clothes! They had a BBQ which got me much needed protein and I took some advice to drink beer to rehydrate. Waiting for the podiums meant it was a late night but lots of lovely people to chat to. 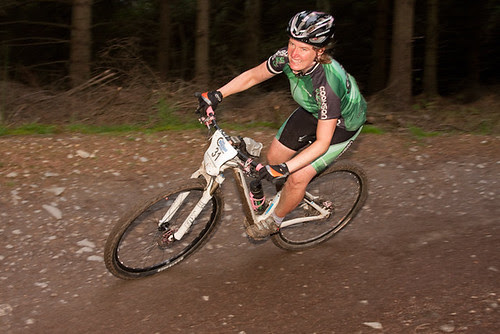 So I finished 1st female and 10th overall soloist, my first top 10!
Garmin Stats for geeks like me.