The night before Hit the North basically involved people telling Ali she was racing, she wasn't so keen on the idea but eventually decided to give it a go. So on Saturday morning we both lined up in Cooksons kit (after a rush to get Ali's shorts dry as me being helpful had washed them that morning!) Ali was also rushing off to Grimbsy for the football after the race. 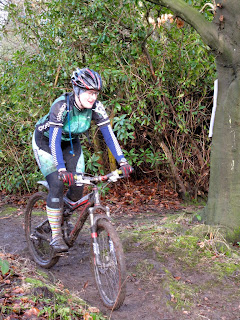 My first lap felt like a parade at walking pace, I made the odd place up on the bits linking the singletrack in the purpose built section and rode the berms slower than I ever had before but it was fun and I was able to chat. Ali was somewhere behind me having started with Pauline and probably chatting as well. On the second lap I had more open track, not that I could ride a lot of the muddy stuff. But I was enjoying just going round, I have to admit that I maybe could have put a bit more effort in, I did however want to ensure I didn't fall off as I was still pretty battered and bruised from Thursday. This lap I could see Damien (also racing for Cooksons) ahead of me so that did help with motivation if I did slow down at all. 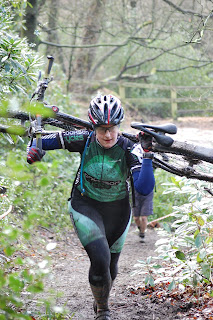 The course was a mix of very muddy sections, steps or slopes to steep to ride up and the lovely blue route at Prestwich. I enjoyed the course even with the amount of walking I was doing and on my fourth lap I was starting to get into it. I could no longer see the girl who had been on my tail for quite a while but I was hoping to get back just in time for a 5th lap, as it turns out I missed it by about 30seconds. 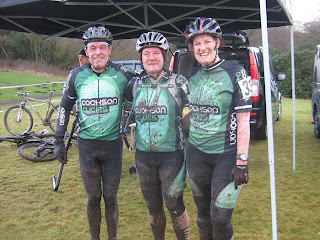 Still 2hours of riding, average heart rate of 174bpm, 15.5miles covered and 555m of climbing. Oh and I managed to win the race so I got to stand on a car tyre. It was the first race on the new bike and it was brilliant, in fact at times I thought I was probably annoying it by braking as the Superfly certainly wanted to go faster. 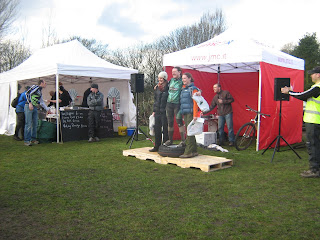