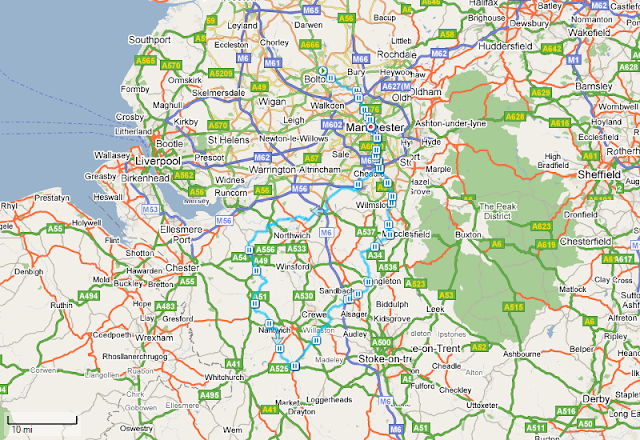 This year I plan to ride a few Audax events. I loved the Poynton Plains 300 last year and would like to build up to a 600km event. So since Ali was away this weekend I entered my first Audax of the year, orginally I was thinking of the 200km event but since I was going to have to ride there and back I went for the 155km option.

I was out the door at about 6:45am ( a little later than planned) and with my old Garmin as my new one decided to die when I loaded up the course. There must have been an issue with the course as by Radcliffe it had disappeared and was telling me I was off-course. I had a good idea of how to get to the start though and my cue sheets on my bike for the actual Audax ride. On my way through Didsbury I met another cyclists heading to the same place and he knew exactly where the village hall we were starting at was in Cheadle so I followed him. I arrived at 8:15am which gave me time to eat some of the biscuits before the off. Rich arrived just before the start with his friends Lisa and Gus and we set off just behind the group, catching them up a few minutes down the road. We rode as a group for a while, although it got a little split on the first hill. I stayed with the front group till about five miles from the first checkpoint where me and two others got a little distanced. It was at this point I realised that we weren't still a big group together. Just as I was thinking of setting off again Rich, Lisa and Gus rolled in and persuaded me to go to the cafe. I wasn't sure as my legs were sore (they were sore when I left the house after 190miles already in the week) but I really didn't take much persuading. I had a huge pile of chips while Rich choose the huge cooked breakfast!

Leaving here we stuck together as a group of four, some confusion about an information point but otherwise navigation was good. We carried on to Audlem for another cafe stop. Here I had Chocolate Cake. My garmin was also telling me that the battery was low so I was hoping it would last till Cheadle, I am too much of a geek to cope with it dying and not recording the ride, from Cheadle to Home I could cope with (just). In this section we had gone along some really muddy lanes, Gus and Rich on cross tyres were flying while I was mincing my way down as my mudguards got clogged and I tried to avoid the huge potholes in the road.

After leaving Audlem I went through a bad patch, my head hurt and I was beginning to think I had been a bit too ambitious. In fact all I wanted to do was lie down and have a nap. This lasted for about 20miles, but 100miles into my ride and an energy gel later I started to feel better. Not sure if it was not enough food or liquid or something like that. Two more information points and then we were on our way back, at about 5km to go I felt really good and powered back to the finish. Here we were fed tomato soup with bread rolls and lots and lots of biscuits. I made sure I filled up before leaving.

Lights on as it was now dark and I retraced my route from the morning. Not so pleasant now with all the traffic! My garmin lasted till I got onto Deansgate, which I know is 20km from my house. So I checked the time and head down pushed all the way home, 50minutes later I was at my front door and feeling good, although very tired. I arrived home exactly 12hours after I left! The two cafe stops and time at the start and finish of the ride added up to 2hours so it was 10hours on a bike. Pleased with that for this time of the year.

So time to plan my next audax ride.