Today was HorwichCC's annual Three Towers ride. I've been meaning to make this for a couple of years so this year I was organised. I said I couldn't work and set an alarm. I was awake before the alarm but it was one of those days I didn't really want to go out, curling up and hiding was more what I wanted. But I knew that I would beat myself up about it and organising things to keep me busy only works if I do them! Obviously I managed to leave late so I rode over predominatly on road. It felt hard and my heart rate shot up, I don't think I have recovered from Kielder yet. On Chorley Old Road I ignored a road closed sign only to find that the road was actually really closed, I cheekily rode along the pavement for a bit since it was so quiet. I got to the barn for 10am so bang on time and it was ages till we left. There was a huge crowd of us but I was the only girl!

Up to the pike and they chose the school climb and then we carried our bikes up the back. Good fun and something I wouldn't do normally. It reminded me that I am rubbish at carrying my bike, but the on-off showers stopped while we were at the top. Down to Pigeon Tower to catch up with the sensible people who had missed out the Pike before heading along Belmont Old Road. Now I don't enjoy this on my mountain bike so on a cross bike? Once we hit the road we lost a few, apparently it was too rocky, which I think was the point as it was a practice ride for the three peaks (which I am glad I am not doing this year but am thinking of next year....)

Over onto the Darwen Moors but not actually up to the tower, at some point I punctured and two guys decided to assist, I left them to it ;-) Over past the Strawbury Duck which looked packed, will have to pop in and see if it is back to its best (someone told me it is good again). Over to Peel Tower, not the nice easy way but another way with some carrying, I rode down in with Chris recently and thought it was a nice downhill! t. 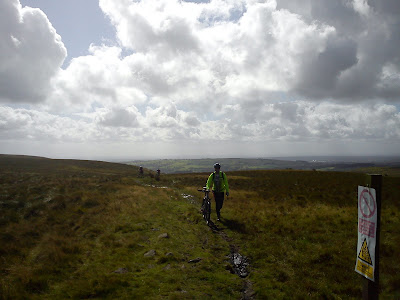 Down to the bridleway over the shooting range and the lads had organised a feed stop for us. Very impressed, lots of cakes will make me do it again! 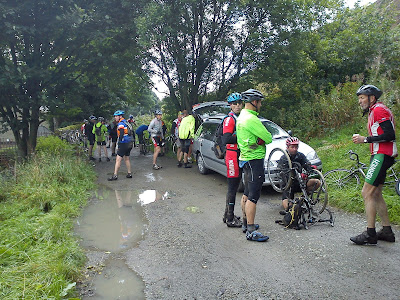 Then it was back to Belmont and up the Belmont descent, lots of them walked/ran up. I was determined to ride. Five dabs but I was happy with that. I let them go back to Rivi from here and headed off back to mine.

46miles on tired not fully recovered legs. I enjoyed it but I'm not sure I'll ever feel comfortable in big groups.