Sleepless in the Saddle 2010

Last year when I first thinking about riding a 24hour event solo SITS was the one I had decided on. I raced my first ever 24 there in 2007 as a team of four girls and last year I had a great time racing in a mixed team. But then I got sidetracked by solo24. I enjoyed the race but never felt I completely got into it as I was so aware I had to work on the monday. So after talking it through with Ali I decided to enter SITS, form in the post I booked the friday, monday and tuesday around the event off. Plans had to be changed and I had to work the friday but Ali had the afternoon off to pack up the car and working kept my mind off the race. I had good intentions of being all organised but that didn't really happen, although I was more organised than I realised! We travelled to Catton Park on the friday set the tent up trackside and then headed to my sister's so I could sleep in a real bed. Helen had prepared us a great meal and then packed me off to bed so I could rest. As it turns out I slept really well, a first for me before a race. In the morning all I had to do was eat and then we headed back to Catton Park. All my kit was arranged so Ali knew where everything was and she got her whiteboard ready.

Since we hadn't got there till 11ish the wait to rider briefing didn't feel as long as it sometimes does and I was soon wandering over to the start line. I said I had no intention of lining up at the front but since I was chatting with Jase and Dave that is where I ended up. It meant I spent the whole run with people going past me but probably gave me a better start than if I had started further back. 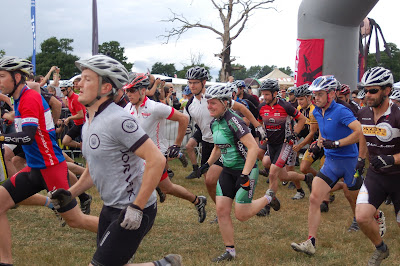 Out onto my first lap and I didn't get stuck in too many queues for singletrack. It felt like I was riding a couple of sections too hard to keep my place, but on the climbs I just span to recover. I came through with 53minutes on the clock in first place. No stopping for me as my sister did a perfect handover and Ali was further along to pass me food. This continued for four laps where I was gaining time. Someone said I was a lap up but I hadn't noticed any other female soloists yet. 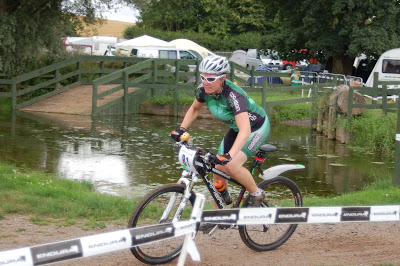 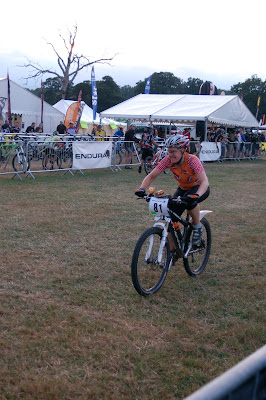 Lights went on at 9pm and thanks to the loan of a MaxxD I knew I could just put my lights on full and not worry about battery life (I had an Exposure Joystick with a triple piggyback battery, two Exposure Enduros and the borrowed MaxxD. This was the ideal setup and now I'm trying to work out how I can afford a new Exposure light). Getting to midnight felt like an achievement till I realised I wasn't even halfway through. That's when I started to think I wouldn't finish! By this stage I was just plodding round, I knew I was still in the lead and someone told me that it was three or four laps. I told myself I just had to keep going. At some point Ali went to bed for a bit so I just grabbed my own bottle. The nice thing about being slow and there being teams in the race was that there was a constant stream of people passing me nearly all of who at least said "keep going solo". That and the friendly marshalls kept me going till Dawn. I then had a really bad lap, the singletrack was fine, but anything else and I was falling asleep on the bike. I think I walked most of the lap. I got back to the pits and just started crying, I was sure Ali would stop me (I felt so bad I really wanted her too). But no she fed me some food and an energy gel, got me changed and sent me back out. I was round in an hour and 15mins, feeling better and riding most of the course again. 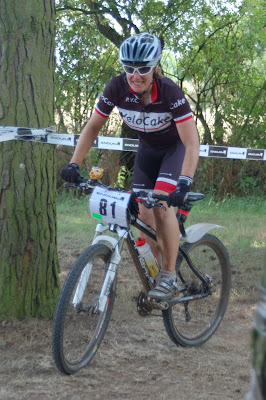 I kept going and although I slowed a bit and walked more of the hills I was still lapping reasonably consistently. 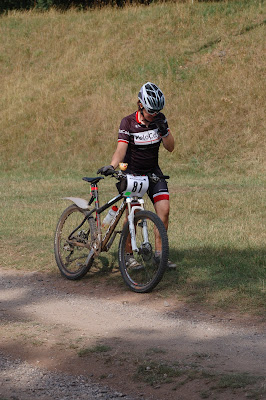 Before I knew it I was out with two hours to go, I was four laps up so I knew this was to be the last lap. I took my time, thanked the marshalls, chatted to people. Lurked for a bit at the end and then crossed the line just after 2pm. Joolze kindly interviewed me straightaway so I probably was making no sense at all. Not looking forward to that video popping up somewhere.

All that was left then was to wait for the podium and let Ali and Helen pack up. 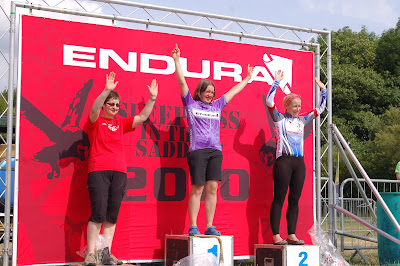 Back to Helen's for Pizza and then I was put to bed since I was falling asleep.

A fantastic race and so hard, unsure at the moment if I want to do another one but I think I will.

Lots of people to thank: