Yesterday I spent the day trying to rest and eat loads. The eating loads was easy but the resting was hard as it was a perfect day for cycling. But it was all for a good reason and after attaching lights, saddlebag, maps and garmin to my bike we packed the car and headed off to Poynton as I had entered the Poynton Plains 300. It was an ideal training ride for the 24solo, with it going to be my longest ride to date and riding through the night. As well as being a huge challenge in its own right! After getting the bike out and collecting my brevet card I was stood round chatting to Ali when someone said off you go then, opps I hadn't turned my garmin on. So on quickly and head off to hold on to the group. I got myself somewhere in the middle and was feeling comfortable all the way to the first control. Which seemed to come very fast. Still water and crisps purchased and the all important stamp and I was on my way. Onwards and through Nantwich where a closed level crossing meant carrying the bikes over a footbridge, I was glad of my light bike although the road shoes were not ideal! This time I ended up in a group of about eight and it was clear when we were getting close to Dinky's Dina as the pace went up and we caught up with two in front just before we got there. Turns out we were the first group there. A cheese and ham toastie was appreciated.

Onwards to Newtown and now it was raining. I was glad I had put my waterproof on. The group I started with soon split and I worked hard to hold onto the front group. As we dropped into Newtown it was Dawn and we went a little further to McDonalds instead of standing on a garage forecourt. Having not been to MacDonalds in years I was not sure what to expect at all. Turns out I had a nice bacon roll, hot chocolate and muffin. Since we all know McDonalds is high calorie food this was ideal. A big group left at the same time, but the first hill split us up. I was suprised to be amongst the strongest hill climbers - think the fixed riding is working. A missed turn just before Dinky's Dina meant chasing to arrive at the same time as the other four. Here I just got an orange juice as I was full and headed off quickly (well so I thought it was still a 30minute stop). I rode by myself for about 30minutes before meeting up with someone else. After an hour of riding we collected someone else and rode together to the next control. This was a lovely cafe at Radway Green Garden Centre. A chocolate eclair here and another orange juice and the three of us left just after the next group arrived. Only 42km left!

At first the hills seemed hard and I felt slow but soon I was hammering up the hills as the distance came down. I had text Ali to say that I would be there by 1:30pm (I had said 3pm the night before). The last stretch was on a main road and we all put our heads down and pushed on, wanting to get under 14 and a half hours. I got to the co-op at 1:25pm, Ali was there to get a picture of me and bubbles were bought to go with the celebration pizza later. Just as we drove out of the carpark the rain came, seems like I had timed that right!

All the stats are on Garmin connect above. But for the imperial amongst you the ride was 192miles and my average moving speed was 15.8mph! 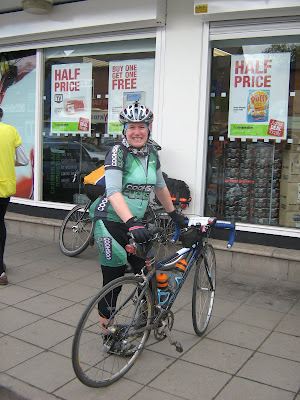 Me at the finish.