Sometimes I just need a little push to have an adventure and this time the push came from Jenn asking if I had any time off this week as she had some holiday from work and fancied riding Salter Fell after my abandoned adventure in January. I followed it up by emailing work to see if I could take a lieu day. On Thursday I found out I had Monday off so I checked with Jenn this would work and promised to be in touch on Sunday evening to sort out a plan. After getting back from Kielder I quickly plotted out the route and sent a text. It was a 46mile loop, starting and finishing in Waddington but obviously we had to get there first. I met Jenn in Todmorden and we headed over via Burnley, Whalley and Clitheroe. Jenn sensibly ignoring my Pendle Hill suggestion. After grabbing some food from the post office in Waddington we headed to our first bit of off-road. 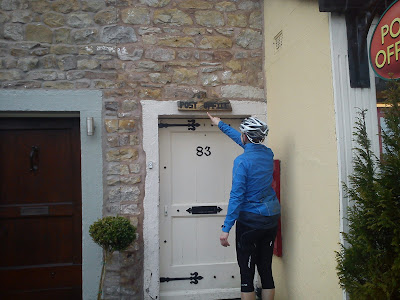 I was walking first on the first section, but made it to the gate on the second section before we both pushed up the hill. I was no longer looking at average speeds as it was tumbling down. Reminding myself I was on a cross bike and not a mountain bike we started descending, I was really wishing for better brakes at this point. Then it was back onto the roads before the next bit of off-road. I have rode/pushed this bridleway a couple of times but this is the first time that I've been charged at by sheep. Did no-one tell them they are meant to run away? We then dropped to Slaidburn where the post office there provided us with warm pies. According to the information sign Slaidburn means 'Field of Sheep by a river'. Since we had seen loads of sheep it seemed appropriate.

Leaving here we were following the Lancashire cycleway and the road was once of the most amazing I have ridden on. I watched the dot that was Jenn disappearing into the distance as I concentrated on spinning my gear and not getting completely distracted by the stunning hills surrounding me. On this road we kept passing and re passing a couple of roadies who were probably climbing faster than me but then stopping at the top for longer. It was a surprise every time a car appeared, not that there were many. The weather was lovely, if colder than expected, but we had been cycling into a headwind for most of the ride. Turning towards Wray and we felt the wind changing direction. We struggled not to get distracted by all the cute baby sheep in the fields.

At Wray we visited our third post office where I was pleased to get a sandwich. Unfortunately leaving here it was straight up, chevrons on the the OS map, proper yanking on your bars to get up the hill. A brief downhill meant we had to climb again but soon we were passing through a gate with a no motor vehicles sign and onto Salter Fell itself. Although still climbing it is such a well made track it was easy to climb, shame about the headwind though. The higher we got the harder it got as it became very gravelly and it was a case of pushing hard on the pedals and holding on. We spotted what looked like a road, a steep road, off to our left and both agreed it was one to explore. I think it may be a gravel track which might make it a little harder to climb, but maps have been looked at to plan another adventure. Then we saw a digger, a truck, some men and a helicopter. Totally unexpected. 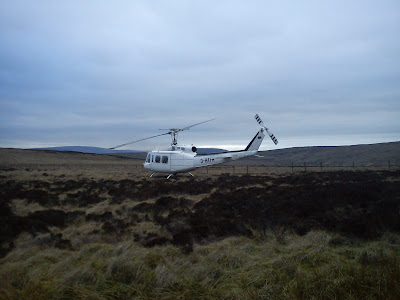 This marked the start of the descent and also the most rocky bit, I made the mistake of stopping (not easy with my brakes) and then it was hard to get going. In fact it was over all too soon and we were back on tarmac. 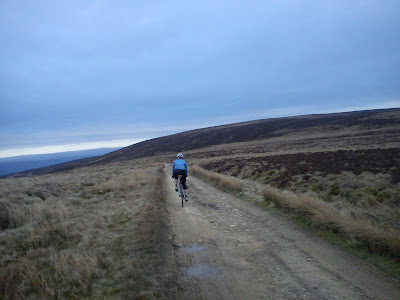 All that was left to do was get back to Waddington, a minor matter of Waddington Fell, and then return to Burnley. My legs were beginning to tire as we took a hillier way back. Out of Burnley we climbed into the hills where we split near the singing tree with Jenn dropping to Bacup for one last climb home and me to Rawtenstall.