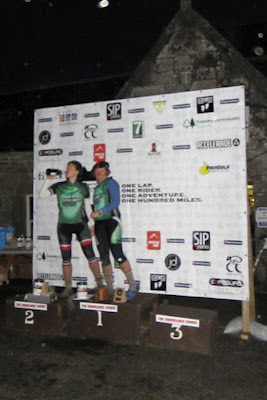 After finishing this race three times and a promise of a special prize for those who had completed it all four times if they finished this year I really had to enter. I really wasn't sure about my ability to either do the distance or manage it fast enough to make the cut-offs. Ali had targeted it as her main event of the year and had done some good training towards it, although the Olympics had kind of brought a halt to it. I on the other hand had a background of a stay in a Psychiatric ward followed by breaking my collarbone and being off the bike for two months. I had been riding again for nearly two months and back at work which led to lots of commuting miles but there had been very little off-road miles. Riding the MTL with Ali a week before had given me some confidence as I had finished the ride feeling strong and rode most of the descents, it had hurt though.

I spent the week before being my usual annoying and anxious self. But I did get organised and have most of my stuff packed by Wednesday night, still meant I had lots of Ali's to do. Work fantastically let me finish early on the Friday as numbers were down at the school I was at so I was home before Ali, meaning that once she got home (she had finished early as well) I was able to pack the car and we were on our way. We were staying at the Youth Hostel this year so arrived and made our dinner while catching up with Norn and Hannah. At registration we found out my number plate had not arrive, I was meant to have one with my name on due to having finished the event three times, so I had a temporary one in case they didn't arrive.

Arriving at Kielder my only real aim was to get round within the cutoffs I had secondary aims of trying to be as close to 12hours as possible and maybe just sneak onto the podium. Due to having finished every running of the race so far I got to start at the front. This meant I spent the whole of the neutral section and the first couple of hours of the race feeling like I was going backwards while all the fast guys came past me. Ali caught me up just after the neutral section and stayed in front of me for a while, I also knew there were two other females ahead of me but that at least one was a vet. At the cross-over point on the course I went past Ali as she removed a layer and that was the last I saw of her.

I reached the first cut-off point with an hour in hand and was feeling confident, I was descending reasonably well and although hurting nothing was too bad. Turning left to head to Newcastleton I spent most of the rest of the race slowly passing people which helps with moral. I made the last cutoff with an hour to go and knew then I was going to finish as I only had 22miles to go and it would take something major to stop me! Like last year I felt reasonably strong on this section. I traded place with a few lads but on the whole I rode on my own. Heading towards the last descent I realised I was not only going to break 12hours but I might just set a new PB (my previous being 11:55 in 2010). I really enjoy the final descent, so much so I don't even mind the bit of climbing joing the sections of singletrack. I crossed the line with a big smile on my face and realisation I would have to return next year!

Turns out I was 3rd female back but 1st senior female as the other two were vets so I made the top step of the podium. Ali had a fantastic race finishing only 20minutes behind me and 2nd in our category. Which made the podium even more exciting. I finished in 11:52:40 so got my PB and was 132nd overall. So next year hopefully I can avoid hospitals for a while!