The weekend of 24solo came around way too fast and I had to accept that I was in no state to race a 24hour and so took the sensible option of riding the 12hour. The plan being just to ride it, enjoy it and not put my body through too much. Unfortunately my brain decided to get completely stressy and I was a complete nightmare for Ali to cope with. Due to use being completely disorganised we headed up on saturday morning which actually worked out okay as I got a reasonable nights sleep in my own bed and we picked up a load of food on the way. Getting to Newcastleton we(Ali) got the tent up and I put my bottles and food in the JMC/ragley tent and registered. It wasn't long before riders briefing and then I had to get my kit on and ride downto Newcastleton for the start. Jane was riding the 12hour as well so we set off together, she was soon off chasing the girls ahead of us but I knew I had to be sensible and let them go, it was hard to do but I knew I couldn't 'race' and was looking forward to just riding for as long as I could. Up the first hill and the first bits of singletrack there were a few bottlenecks but we were always moving. 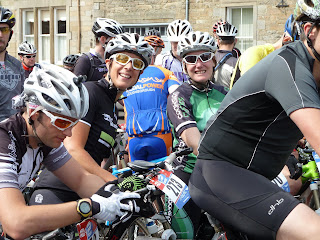 First lap done and I came in to the arena, new bottle and a belgain waffle were handed over and I was off again, it felt like I was near the back of the field but that was fine. Round the arena and I found that there was a nice rooty section around the cabins, not so great while trying to eat. It was at this point I realised the big hill up to where the arena was based last year would be in every lap. It was okay at this point I was getting up it in middle ring (Chris's voice nagging me in my head) but I knew soon it would be a granny ring climb.

Round again and more food and lots of cheering followed me round the arena, I think it was this lap it started raining. I ended up riding the singletrack from halfway with two guys, for the first time I had a wheel to follow and it definitely meant I rode it faster. Into the arena and I grabbed my gillet, more food and a gel for halfway round the lap. 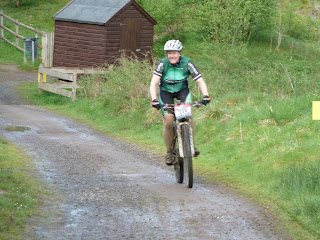 Out again and I was slowing but definitely having fun, I had decided my aim was eight laps. You had to finish before midnight so there was no chance I would get more in. Eight would give me about 90miles of riding as well. It stopped raining and I was doing my usual of chatting my way round the course. Coming in on this lap Ali tells me I am in third, about five minutes down and maybe I am trying too hard. But I was feeling fine.

Out again, more food, more cheering people were great in the arena. A warning that a short slippy section was slippier meant I rode into the tape getting a little tangled. But I felt I was riding the singletrack sections well and on the climbs just settled into a pace and let people ride off on me.

At some point my light was put on my bike and 500m later felt off, some kind soul came to my rescue and put it on and tightened the clamp for me. Exposure Lights also helped me out when I realised the connector on my piggyback battery was bent by lending me a spare Joystick for the race so I didn't have to worry about my lights. With my 6pack on my bars and a joystick on my head it felt like I was riding as fast as I had been in the daylight.

Out of the last lap and Ali thought I had about half an hour on 4th so I just had to enjoy the lap and ensure it took me less than two hours. It started raining again this lap and a very soggy Ali was waiting for me at the finish. 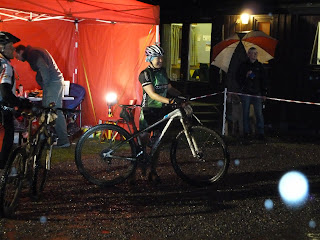 I actually felt I could have easily continued and riding at an easier pace meant I had found eating and drining my way round easy. Although when I was lay in the tent listening to the rain getting heavier and heavier I wasn't too unhappy to have only ridden the 12hour. 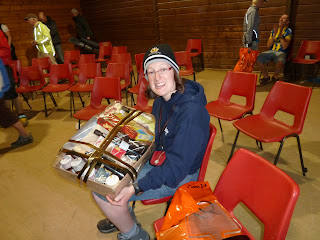 The next day we packed up the tent in the gaps in the rain and headed to the prize giving. First was the raffle where Ali won a huge food hamper! Then I was up, 3rd in the 12hour. I was really pleased to make the podium.
Then it was time to drive home, we still have lots of kit and bikes to sort out, the fun of racing.
Thanks to: